…Every sport has obvious stars – those always on TV, adored by crowds of fans. And then there are people who’s names won’t tell much to general public but who commandeer recognition and respect within the circle of that sport insiders: athletes, coaches, journalists…

There are not many faces as recognizable in international cross country skiing as that of Egor Sorin. A former elite skier himself, in the recent years Sorin made a smooth transition to being an assistant to Markus Cramer, Team Russia coach. Sorin is always on the ski tracks leading athletes in yet another grueling session – personally.

But even when the training session is finished, Sorin’s work day is far from over as he often seen patiently answering international media’s questions – Sorin’s English is by far the best in the team. Ditto for his eloquence and genuine understanding of media’s needs ( for which he gets a special thanks!)

in the spring Sorin got a long expected and, many say, a well deserved promotion – he’s now officially one of the Team Russia coaches. 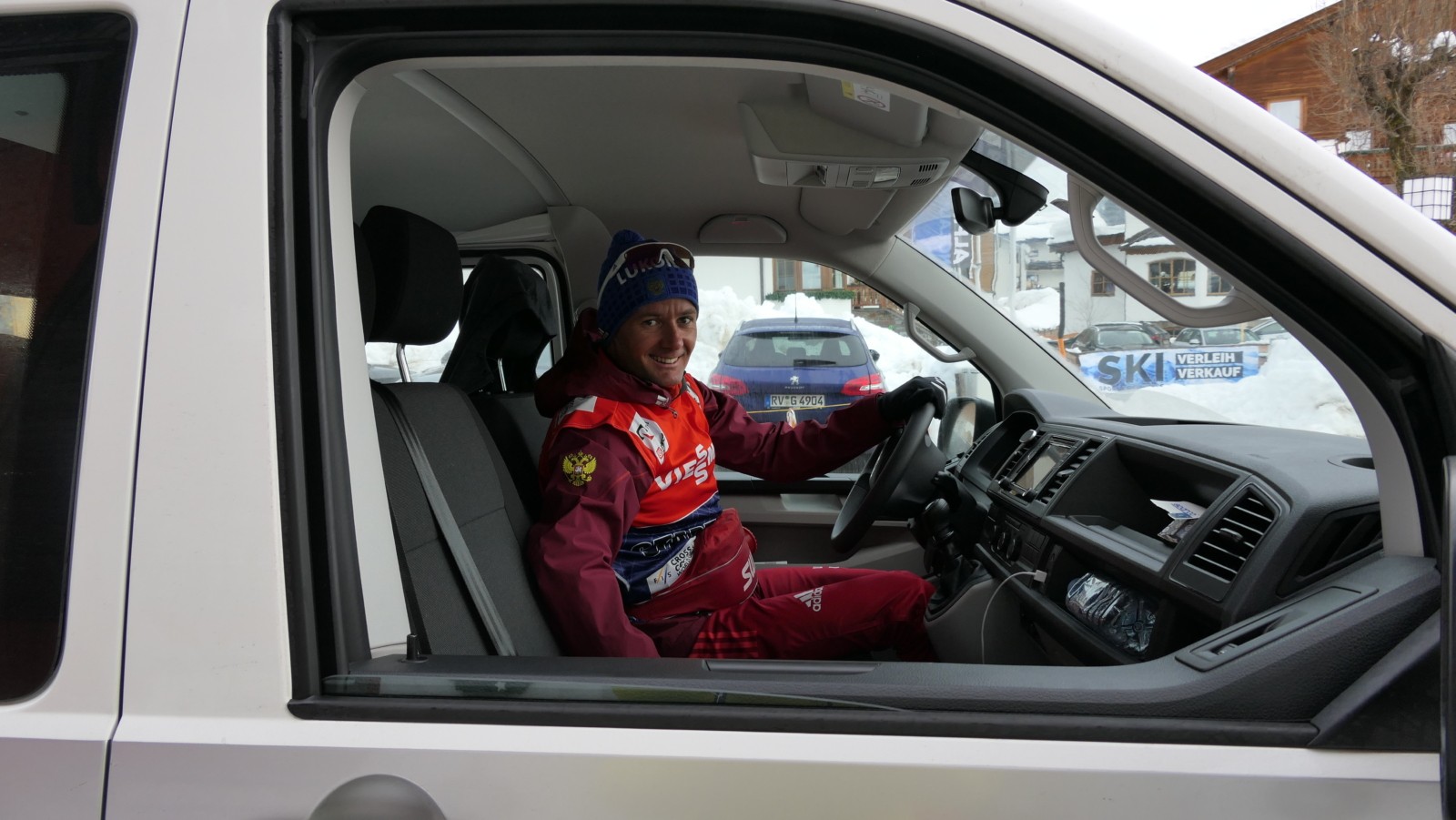 Congrats, you became a Team Russia coach at the age of 32. Some critics would say ” Way too young, way too early”. Others would note a trend: cross country skiing’s brightest stars of the last season: Johannes Klaebo, Alexander Bolshunov, Stina Nilsson, Natalia Nepryeva are barely out of their teens. Should the coach be mentally close to Millennials, speak their language and be able to tell the difference between Instagram and Snapchat?

– The age is not an issue for a coach. Yes, traditionally in our sport a national team coach is the one with lots of experience and a bundle of fancy certificates. But now there’s a lot of fairly young people in international sport who managed a transition from being a pro-athlete to being a top coach within a record-short time frame. And yes, I do believe that in certain situations my age is and will remain of advantage in dealing with athletes.

Also one has to remember, that it takes some serious ambition to become one of the national team coaches.- being a regional team trainer pays nearly as much but you are far less in the spotlight and being judged far less harshly.

You worked as an assitant to Markus Cramer, one of the sport’s top specialists. What did you learn?

I am hugely thankful to Markus for lots of things but first and foremost for being open and responsive. It was Alexander Legkov who introduced me to Cramer and I immediately knew it was my lifetime opportunity to learn from a top coach – moreover, a top coach who represents a rather different training philosophy. I did a lot of different things to assist Markus: from videofilming ( both static and tracking camera, skiing alongside our athlets) to analysis to scheduling training sessions and conducting them – those are just some of the things I did. And then of course there was a language barrier – many skiers in our group did not speak much of English at the beginning and Markus’ Russian was non-existent either. I had to tranlate a lot. In the last year the guys & girls’s English have gotten much better so they could communicate with Markus or FIS officials directly

@esorin1985 is a fairly rare bread of a top coach: international level skier himself quite recently, he was performing dual roles of a training squire and a scientific analysist in the @crami_62 group. On this photo, however, Sorin is captured in a more traditional role of a "feeder" to @sergei86m at the Toblach-Cortina @vismaskiclassics race

One thing I feel I need to add about Markus: he is truly one of a kind – professional sportsmen and women are extremely competitive and should anything go wrong with their career, they most often blame the coach. Not every athlete who trained under Cramer became Ustyugov and won 5 medals in 5 races at the world championships – for some Markus’ training regimen did not work out. But not a single one of ever accused or blamed him for their shortcomings – even those who dropped out, were always grateful.

It may or may not be linked to one important side of Markus Cramer’s personality: he can publicly admit his mistakes. An athlete and a coach should be able to back off and admit and correct mistakes when and if they were made.

…I’ve also learned quite a bit ( at least I hope so) from the other Team Russia coach, Yuri Borodavko. Borodavko and Cramer’s methods and paths to athlete’s success are different but both actually work – look at Alexander Bolshunov and Denis Spitsov this year, look at Nepryaeva! It’s both challenging yet very interesting to try to amalgamate the best from their practice with my own ideas.

Your English is the best among the Russian trainers and skiers. How does it affect things?

– I’m happy I’ve invested enough time & effort studying it ( laughs). It breaks barriers and simlifies communications, of course. For instance, a few weeks ago and went with Bolshunov to a famed Olympiatoppen in Trondheim. He underwent a series of tests – and I had chance to talk to scientists and specialists at the Norway’s leading research facility of elite sport. At some point I’d really like to come and do an enhancment course down there – they really know their business down there.

Which national teams are ahead of the pack when it comes to training methods these days? What could be borrowed from them?

– The Swedes and, of course, the Norwegians. They are several steps ahead of everybody else in the skiing world. For example, I like the way their plan and conduct their high intensity microcycles. The Swedes are ahead of everybody in things like modelling specific future races on rollerski treadmill, using multiple cameras & screens on treadmill for an athlete to watch and correct his technique

COMING UP NEXT ON @daily_skier: Interview with @esorin1985, possibly the youngest national team coach at 32 👏

Everyone in a rowing circus the elite skiing world is, knows you as a “coach who is always training himself| . Along with his athletes and, sometimes, all by yourself. You are not alone – Josten Vinjerui, for instance, is also always on skis with Musgrave, Young and the rest of the British squad. Do you reckon that’s where the skiing world is moving – squires, half coach – half training partner?

– ( Laughs) Yes, especially at the beginning many were asking who is that guy – he is always training but never actually runs the race. By training within the actual group of athletes I get much better idea of intensity, of difficulty, of recovery speed and all sorts of other important things that at the end will decide who wins – and who will not. On the other hand, the sportsmen also like to see their coach training – and getting tired – along with them. You got to remember also, that even in the group athlets often have individual daily assignments – and a 3-4 hour long training session all by yourself – and the same session with a sparring partner are two completely different things! At the beginning I was often training like that with Legkov and he appreciated it a lot.

Speaking of Legkov – him and Ustiugov are, arguably, the most successful, most achieved Russian skiers of the last decade. Is it hard to work not with not just an ambitious skier but the one who has already won a lot and has every reason to be proud of himself and his ways?

– One could take it as a challenge – but equally, one can take it as a unique opportunity to study their regimen, their psychological make-up and all sorts of other things that turn an ordinary elite skier into a champion. The most important thing I’ve learned so far – they all are very different, what works for one might ruin the other. You have to fine-tune them like masters fine-tune Stradivari violins – only then they deliver!

Examples? Kryukov ( Vancouver 2010 Olympic champion in sprint) and Ustuigov have a great feel of their body during the competition season – and one can’t, shouldn’t try to convince them to do things they don’t feel they should be doing. In that sense, they are better than any coach – to themselves. Others, on a contrary, could be hesitant and unsure, you have to control their training and talk to them a lot, explaining what is being done and why.

Anyways, at this point in time I am more interested in working with young skiers – to teach them to listen and to control their bodies, to understand what their new training regimen is about – and why is it the way it is, to improve their technique and to work on their psychology.

Don't miss a long, candid interview with a new Team Russia coach @esorin1985 that is coming up on dailyskier.com!

What kind of skier you’d never agree to work with?

– I am very skeptical when I hear that certain athlete has impossible character and attitude problems – that’s the ultimate task, the challenge of the coach to “find keys” to that athlete.

The only type of athlete I really dislike is a “non-achiever” – the one who is well satisfied by just being in the national team, being paid for it – but not striving to win.

You may also like:  Aline Who Trains For PyeongChang And Who Never Gives Up