Meet Astrid Øyre Slind who is well on her way of becoming one of the top stars of international skiing. She spent a beginning of her career competing at the World Cup distances, winning U23 World Championship. In 2014 she, however, had switched to classic ski marathons. First year wasn’t that impressive, but the last season Slind was constantly breathing down the neck of the Ski Classics leaders, Britta Norgren, Justyna Kowalczyk and Katerina Smutna  , all of whom have been on the ski circuit for much longer. Would the coming season be the one of Astrid Slind? Not much left to wait, the season kicks off in Pontresina at the end of November.
…For the ease of reading we have decided to separate the interview with Slind into two parts: in the first one Astrid talks about her sporting goals, achievements and career, while in Part 2 we discuss how to incorporate cross country skiing into the modern media world without losing its identity – as well as some must-know trivia. Enjoy the read!

I. Who Is Astrid Øyre Slind ?

One of the leaders of Visma Ski Classics; she was second in Vasaloppet this year.

She has two sisters – an identical twin, Silje (“we tried trading places at school with some success, but never with our boyfriends, haha”), and younger sister, Kari. Both are elite skiers too, but Astrid is the only one specializing in long distances.

She travels for well over 100 days a year, mostly between Scandinavia and continental Europe, where most races are held.

She trains for around 800 hours per year, most of it on skis and rollerskis, but also does a lot of running in the summer (“I enjoy running over swamps in Trøndelag and in the mountains. I feel strong when I do it; it’s good for my self confidence”) 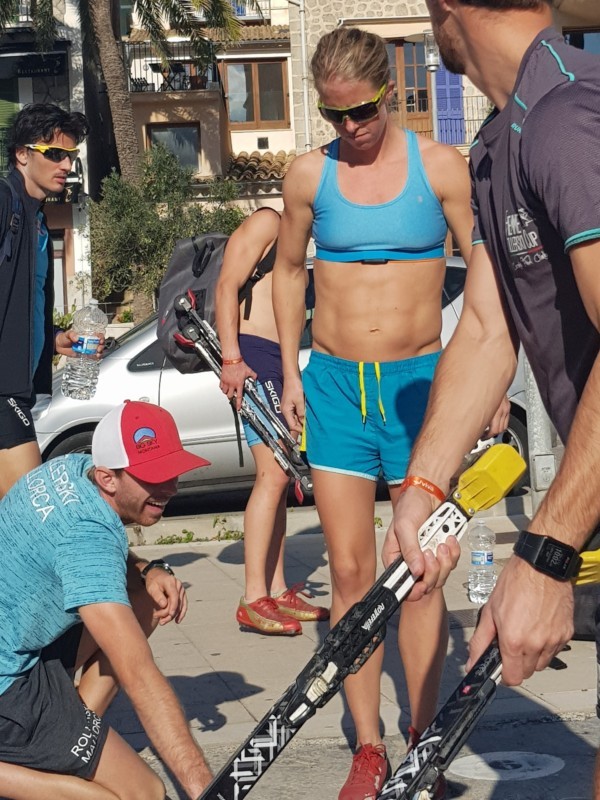 II. What do you notice and observe when/if you’re lucky enough to meet Astrid during Ski Classics competitions or training?

Her confident gait and a warm smile that betrays a really shiny personality. She has blue eyes and blond hair, with a hairband struggling to keep it in a ponytail.

She is shaped like an advertisement for the “ideal athlete’s body, 2017 edition”: strong yet light, almost flying on the run.

She is blissfully unaware of her appearances. Would you pose for the Body Issue, were they to ask? Yes, comes the answer, almost immediately – followed by “wait, isn’t it full naked? Then no, definitely no – make sure you write it down as a no!”

She is constantly smiley and has an easy laugh. They are cracking jokes – a lot – in Team United Bakeries, and the ability to come with zany lines seems to be a pre-qualification for the team membership.

She has an exquisite doublepoling technique. And miles and miles of training every day in the company of ” boys”. TUB’s “boys” roster 2017 includes Stian Hoelgaard , Torleif Syrstad , and the veteran of the TUB, Tore Bjørseth Berdal . And then of course, there is John Kristian Dahl, the team biggest star and de-facto captain.

Fluent English, thanks to several years spent in Massachusetts (“my father was coaching a ski team down there“)

III. We sit down for a formal interview:

Who has the most mental strength among the Slind sisters?
– Define “mental strength”. For stubbornness, it might be me. And for dealing with injuries and still getting back on track, both Kari and Silje are better than me. They can handle it better – for me it’s more stressful.

You were running skate sprints and now you’re a recognised master of long distance classic races?
– I just wanted to try long distances and I figured I’m good at it and I enjoy the races. You need to be fast at the finish in long distance races and that’s the advantage I have. Silje, my sister is also very good at sprints.. she would be as good as me if she chose to do long distances.

So you woke up one day and thought “I want to run Marcialonga?”
– No, I actually had a tough season and did not ski as well as I wanted and took a break – then raced the Svalbard ski marathon; it went well and I talked to  Johan Kjølstad, then on Team United Bakeries who said “why don’t you join our team, we are looking for a strong girl”. It turned out to be such an amazing team and I enjoyed it right away.

What do you tell yourself at the distance when you feel that you can’t go any further?
– Well, you just have to keep on going (smiles) When you are on a tough uphill and other girls start to pull away… it just sucks, it’s the worst feeling… (sighs) I want to hang on, I want to increase the pace and know that those behind me also are in the chase. You just have to suffer through it!
I don’t have one special trigger word – apart from the obvious ones. One voice inside your head says “stop it, it’s not fun anymore” while the other says “shut up, you came here to fight – then fight, show what is that you’re really worth”

In the US these days well over 50% of all running marathon participants are women. In the long distance ski racing… well, let’s just say women are in the minority. What gives?
– It’s a question that keeps coming back all the time. To attract more women to skiing we, female pro-skiers have to show that we are on the same performance and competition level as men. However, it is the same group of girls fighting for the podium and I really don’t understand why there are no more strong female skiers that join – especially, the Norwegian girls, many of them have potential to do great in ski marathons while the competition for the spot in the national team is great. So, we have a large group of girls who are almost as good as national team members , who do great in Norwegian Cup and Scandinavian cup but not really coming to marathons and enjoy traveling and competing in Europe.

Are you a person to emulate? Girls want to be you?
– It’s a tough one (laughs). Maybe they want to be more somebody else than me. Take Marit Bjorgen – she’s more attractive ..and yes, she’s slightly richer than me and better known (laughs) …Becoming a skier, you make a choice at the early age.. I started small and I wanted to be the world champ or at least a very good skier. I went all-in for that, I did not party much or did much other stuff the youth does. I don’t think many are prepared for sacrifices like that. Nowadays most people, I think, envy me my life and says “oh, she’s the lucky one” – but I don’t think everybody sees things that way when they are 14.

How does it feel to be the only girl in a team of boys?
– They treat me very well, actually. I can learn a lot from boys. When I’m the only girl I join everything they do and I am part of the team that I would not be if there were to be, say, two girls – then there would be a separation: boys run one lap while girls run the other. Now they just have to include me and it’s very beneficial for my results.

Do they cut you any slack or are you just ‘one of the boys’?
– Well, I get to stay in my own, separate room when we travel while the boys normally have to share one. Language? They know that I can handle it.

Do they discuss girls in your presence?
– Yes…they do.

Do you participate?
– Not in the same way, I’m not into girls so it’s a different angle , but it’s fun for me to hear the boys point of view on various aspects of relationship too.

You’re always the first for breakfast at the training camp.
– It’s because I don’t have to wait to go to the bathroom (laughs)

What is the economic side of life of a professional skier? Are you rich?
– Right now “economics” are quite… variable (smiles). A lot depends on my results and there’s no such a thing as a high, stable salary. In fact, we don’t have any salary at all right now and, of course, it’s not good for being a serious athlete. So, it’s mostly prize money. I have to drive an old car and have to think of what cloths I can afford. But I love skiing and traveling and racing, so it’s choice. Not many skiers are really rich. Certainly, we on average make less money then what people tend to think.

– When things are unfair, it upsets me. Here is a perfect example: this summer we did a big rollerski race (Astrid refers to the Blink Festival’s 60k long distance race, which she actually won), and the boys’ winning prize was NOK 70000, while for the girls it was NOK 25000. That really upsets me. It signals that girls are not that important. It really values my work so low and there’s nothing I can do it about it. It’s not my fault that there are fewer women at the start line than men. I’m doing my job as hard as any boy!

…The profile of Astrid  Øyre Slind is to be continued tomorrow. Stand by

You may also like:  Up Close And Personal With Astrid Øyre Slind, Part 2