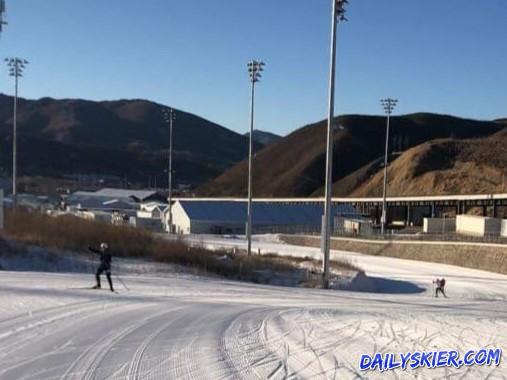 The scandal around the use of ski waxes containing banned C8 fluorocarbons , at the Scandinavian Cup in Falun keeps on flaring.

Perfluorooctanoic acid known colloquially as C8 is banned in the European Union , Norway and Switzerland to name but a few.

Therefore using it in ski waxes is illegal as of 2021 – both in FIS and IBU competitions since those take place in Europe, almost exclusively.

There are three problems with that:

– Most importantly,there is still no reliable detection device – that’s why FIS postponed implementation of obligatory checks till … some future point in time.

Now that all eyes are on the Olympics, the question is, would C8s be used on Zhangjiakou ski tracks?

An interesting conundrum indeed. China has NOT banned PFOA (Perfluorooctanoic acid) – so, what authority does FIS have in banning a substance that is entirely legal in the host country? And without means of checking compliance any way?

” The weather in Zhangjiakou is widely expected to be cold, with very dry artificial snow while C8s primarily give advantage in high humidity conditions.” says Max Volkov, distance team coach of the Chinese national team, who is on the ground now.

“Of course, a lot of waxes, sprays and powders contain PFOAs to some degree – but probably only traces of it in whatever actually would get used – if at all”.

You may also like:  Therese Johaug is launching personal care line