Let’s start with admission: it’s great fun to write about something new, different and, with a right push, with a potential of changing things around. Drastically and to the better. Let us explain.

You all have noticed that in the past few years the “carbon fiber revolution” has arrived to cross country skiing. First all boots manufacturers then ski makers ( not all) turn to new ways of adding stability, cutting down weight and utilizing high stiffness carbon fibers provide.

This year rollerski manufacturers caught up and put out on the market more CF models than ever before.

End of the phase? Nope.

Enter Jorge Vidal a former television reporter and avid sport enthusiast from Jaca, Spain. Back in 2013 Jorge launched Bonés Skiroll, a clean-slate project in the country not exactly known for its millions of skiers or rollerskiers.

Since then Bonés successfully carved our its niche on the market: reliable, budget – but, you know, no frills rollerskis.

Guess what, it’s all changing now!

Because on August 1st. Bonés starts taking orders on cutting-edge rollerskis the world hasn’t seen before. This is what makes them so special:

– They are officially world’s first rollerskis made using graphene infusion into carbon fiber mold. Highly complicated and ridiculously expensive process – but the one that gives unique properties to the final product. More about that later.

-Unique shape: they are somewhat trapezoid-shaped with upper platform being significantly wider than anything else on the market. Bonés says they testers loved it as it adds extra stability without compromising technique/performance. 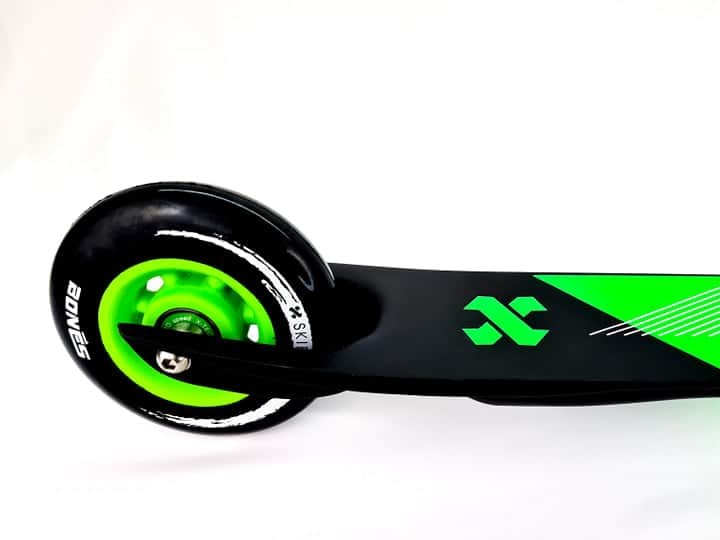 – And did we mention graphene??!

Look, the graphene rollerskis would not be possible for many years to come if not for exceptional circumstances and those are called “Quionne”. Many have heard of and some even tried those ahead-of-their time skis designed by Marcos Rupérez a few years ago. Since then Marcos and his team, , quite simply, have moved to much, much greener pastures, where they developed, fine-tuned and are currently using graphene infusion processes in other products. Which products? NDAs often prevent engineering companies from discussing their clients but we would drop just two names: Boeing and Bugatti. Thus Bonés Graphene themselves are sort of fusion of fancy engineering on one side and solid market expertise on the other. Besides, the guys are simply friends who have known each other for years.

Later in the week we shall publish a long-format interview with Jorge Vidal where he talks about how exactly graphene is added, what properties it gives to the frame, how much it costs etc. etc. We just want to point at something else :

We said it before & we shall say it again: the cross country skiing is presently not cool enough for your average urban kid. Launching a product that has sleek shape, shares technology with Bugatti Chiron and price that will probably make you gasp somewhat might be just what the doctor ordered to turn things around, to bring the new (young) people into the great sport.

You may also like:  Skiweltcup Dresden: It Was Success, Start Marking Your Calendars For Next Year

Oh, and the price is €599 and they will be available in S,M and L configuration depending on your weight.