It’s not like top Norwegian skiers are not under enough pressure lately as-is, what with Johaug banned from the Olympics and those never ending rumours about using anti-asthma medications without compeling medical reasons.

Now the skiing stars face an attack from the Norwegian authorities – from the Forbrukerombudet or the Consumer Ombudsman agency – to be precise.

The issue at stake is one of the hottest, most debated ones the world over – when/how should celebrities and influencers reveal that those products and services they visibly enjoy on their social media accounts are often not so much their personal choice – but that they were paid for by providers of thereof ?

The US Federal Trade Commission even runs a dedicated Q&A regarding paid promotion on its pages – although we are not sure it clarifies the matters much:

‘…A famous athlete has thousands of followers on Twitter and is well-known as a spokesperson for a particular product. Does he have to disclose that he’s being paid every time he tweets about the product?
It depends on whether his followers understand that he’s being paid to endorse that product. If they know he’s a paid endorser, no disclosure is needed. But if a significant portion of his followers don’t know that, the relationship should be disclosed. Determining whether followers are aware of a relationship could be tricky in many cases, so we recommend disclosure…”

The Norwegian Markedsføringsloven ( the Marketing Act) is unequivocally requires to inform the reader that this is advertising.

But what appears to be clear and simple in theory, is always riddled with uncertainties in real life. Is commenting favorably on, say, one’s ski club, should be considered a hidden endorsement? Or just appearing in pictures wearing a jacket with those now ubiquitous team sponsors’ logos? What should one do when it’s a personal gift – also tag it #ad or #sponsored?

You may also like:  Petter Northug Dreams About His Brother’s Girlfriend!

The whole world is racking its collective brains trying to strike balance between freedom of speech ( that should include the right to say nice things about products and services you like) and defending rights of consumers who eagerly follow material choices of their heroes.

The debate is only growing as advertizing shifts more and more from traditional to social media: brands worldwide spent roughly 65% more on Facebook, Twitter, LinkedIn, Instagram and Pinterest advertising in 2016 than they did in 2015 with Instagram (naturally) being the fastest growing on.

The difference between the US free-wheeling capitalism and the more controlled one espoused by Norway? The FTC has no way of punishing the offenders as of now – while the Forbrukerombudet ( Consumer Ombudsman) , is empowered to issue fines of NOK 50,000 ( EUR/USD 5000) or, in exceptional cases, more for failing to disclose paid endorsement.

While there is no record of its actually being done in practice, some of the Norwegian skiing stars have reacted to the Forbrukerombudet rebuke in their address swiftly:

Heidi Weng has retroactively changed tagging of her photos – as spotted by Vg.no and now seems to be adding #ad or #reklame to most of her posts. 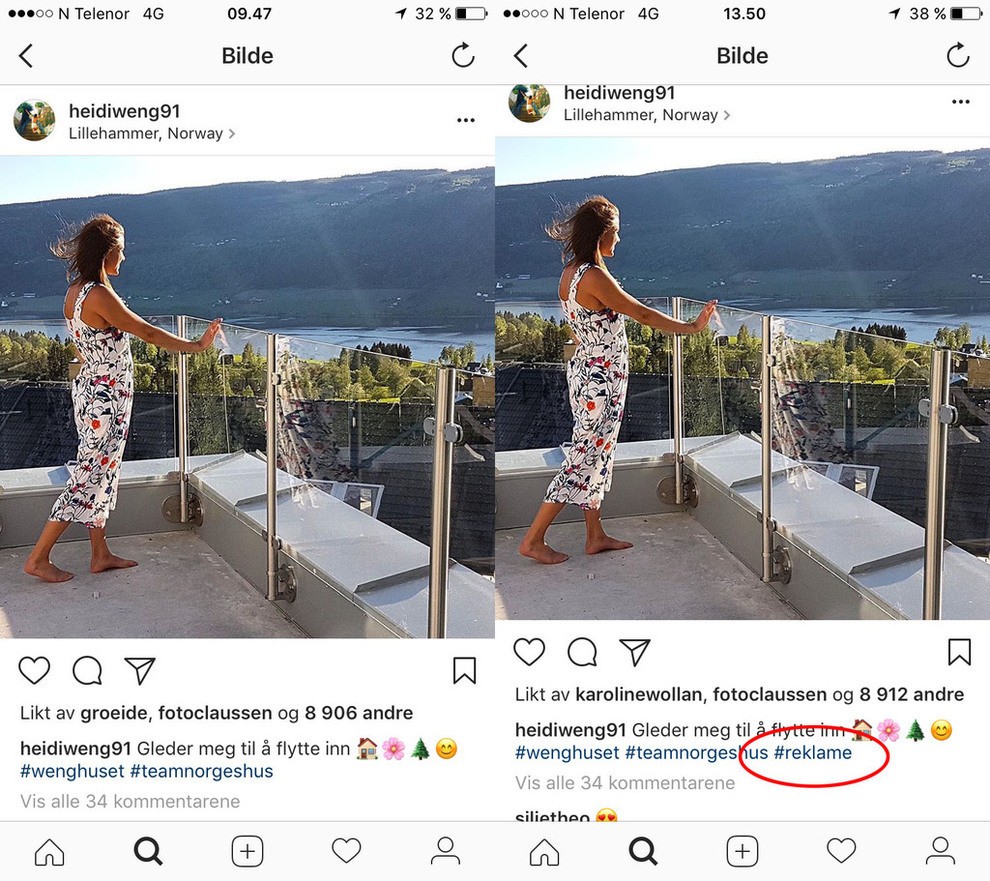 ..to the point that we are no longer sure what’s being endorsed – try to guess looking at this one – we couldn’t

The new prince of Norwegian skiing – and social media star on his own right, – Johannes Høsflot Klæbo is more ambivalent:

…and sometimes he is not

The one who does not seem to care? Petter Northug Jr., of course

– his line of excuse would, of course, be that no matter what else is in picture, the shine emanating from the King of Skis himself would eclipse that of any product.

strangely enough, the most savvy and ably assisted by the whole team of marketers star of Norwegian skiing, Therese Johaug, hasn’t started tagging her mega-popular uploads as of yet –
despite them being obvious product placement

The one who follows the rules to the hilt? Astrid Uhrenholdt Jacobsen. The thirty year old skier is among six winter sport athletes standing for the election on the International Olympic Committee Athletes’ Commission, the closest thing to being a ” sports’ politician” – so it would not do to be fined for undisclosed endorsements.

Got to make my own ski🎿😀 #noteasy #handmade #bandofheroes #rossignol #reklame