International competitions are between countries – and countries tend to be richer or poorer. Or, for one reason or another, unwilling to invest into elite sport.

Perhaps, nowhere it feels more acute than in cross-country skiing.

The Norwegians dominate the sport not only because they have a never-ending stream of talents, but also because they are willing to spend what it takes to win. As in training camps, equipment ( not skis – in million euros worth wax trucks), salaries of coaches, doctors, physiotherapists, technicians etc. etc.

The Russians have started to catch up lately. It is tempting to invoke doping scandals of the past but those in the know point out that the Russians have invested heavily in all of the above, permanently employing dozens of staff on their team.

Separate issue is money for athletes. Again, the Norwegians and the Russians are ahead of the pack – their systems of doling out moneys to their top athletes are very different but the result is the same: a member of the national team is one well-paid individual relative to her/his age and country’s average income. Thus making becoming a pro-skier career an attractive choice to tens of thousands
of youngsters & their parents.

Could the smaller nations compete? In short, not in volume, not in the amount of top class skiers i.e. permanently fighting for the podium. The path they have chosen, collectively, seems to be “identify a medal prospect early – and invest into her or him, thus creating conditions on par with top Norwegians.”

You may also like:  Definitive Guide Of Where To Ski Outdoors Mid-October

With a help of local sponsors, it seems to work, to extent. Justyna Kowalczyk in Poland, Dario Cologna in Switzerland, Alexei Poltoranin in Kazakhstan – those are but a few names of top skiers who were and remain able to win any competition, anywhere. Downside? There is almost nobody close to them in their own teams. All resources went to aid & abate the leader?

Today we talk to a skier who have decided to end her career in the national team just months ahead of the World Championship where she was all but guaranteed to run. Of course, all said below is her personal opinion – and we shall be absolutely willing to hear her ex-team management as well, were they to comment.

Meet Anna Seebacher – ex Team Austria. Anna was regular at the World Cup in the last seasons and went to compete at the Olympics-2018. More recently, Atomic have chosen Ms. Seebacher as a face of its winter collection

With that impressive list of achievements at the age of 24, the career seemed to have just began. Yet Anna has decided to call it quits in September. Here, in her own words^

“I decided to end my career because we have no trainer in the team, because Teresa ( Stadlober) and Lisa (Unterweger) are being coached by their fathers. I wanted a trainer but Team Austria (ÖSV) was thinking we need no trainer. I had the chance to train with Teresa but the training of Teresa is excellent for her – but does not work for me. I wanted to get better and I want some new inputs but if Team Austria has no trainer for women what should I do?

I also told the team Headcoach Markus Gandler last year, in June of 2017, that I need some income because I ‘m studying the law at the university and have only a small sponsor but no stipend from the team, nothing.
My parents supported me a long time but I need my own money. The ÖSV people did listen to me – but they did nothing…

I‘m really sad because of the World Championship at home but there is just no support from the national team.

The system is set up only for the best skier in Austria – not for someone, who need some more time to get better.

Don‘t misunderstand me, Teresa and I are really good friends and I have my best hopes for her and that she will be taking a medal in Seefeld-2019.

But in my opinion, in Austria they should think how to make cross country skiing more attractive for children and young people and give them more time and more possibilities to have fun and success.

Now I am training to become a policewoman and I’m getting paid for it, as well as continuing my university studies.

I haven’t completely stopped ski training either. I‘m running for the Adidas XCS Team because the people there are really nice, we are a good team, we have the same philosophy and I hope to make some Euroloppets and Worldloppets and have some fun with nice people and earn more experience. 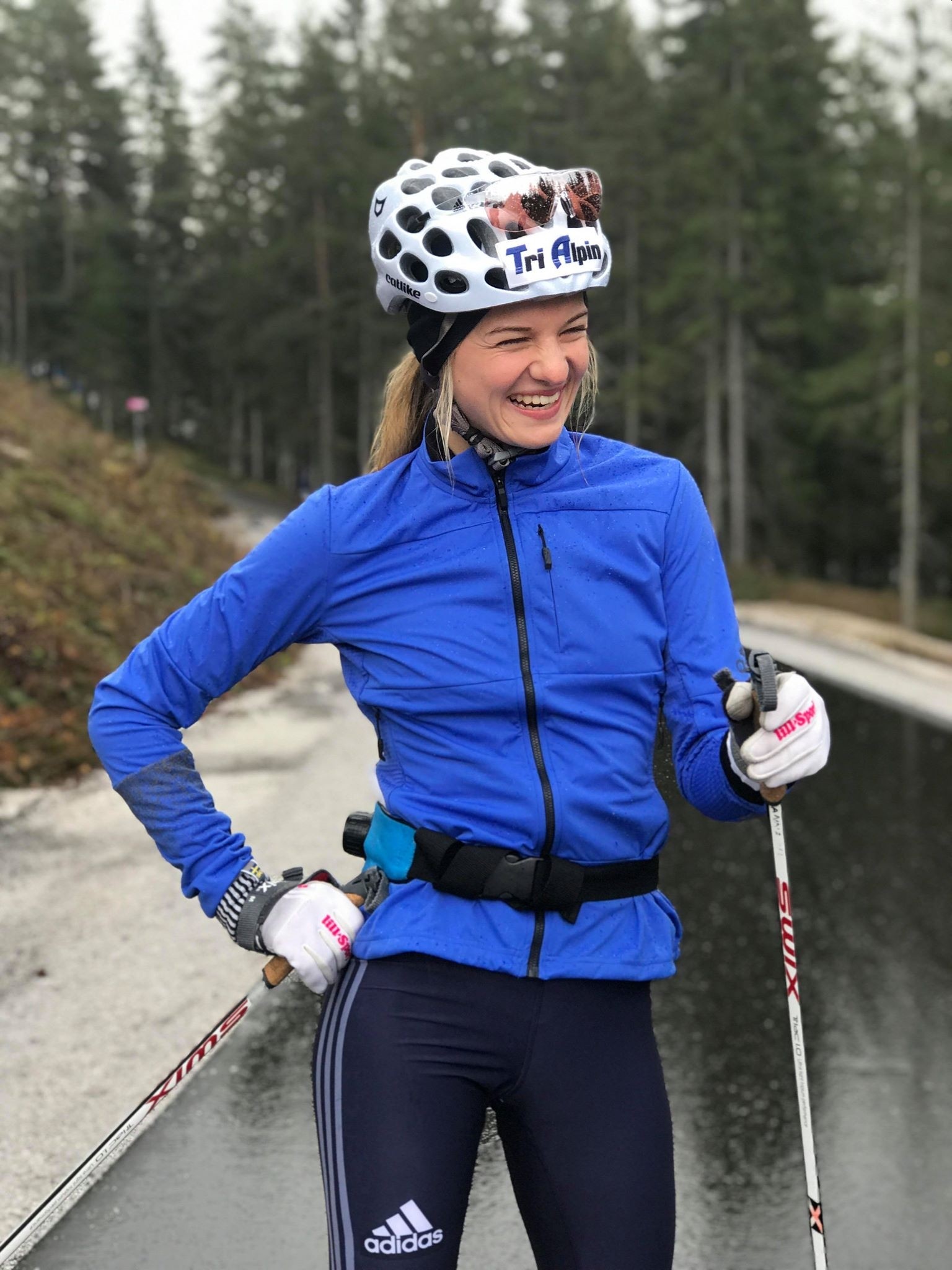