Let’s start with an obvious:

Fischer Sports is company that plays in the league of its own when it comes to cross country skiing. It is clearly the largest ( even if the company refuses to divulge production figures and revenue size) ski manufacturer in the world.

In ski racing the Fischer mettle has been proven time and again. At the Olympics -2018 in PyeongChang 14 golden medals were won on Fischer skis – while the rest of the producers’ accounted for 6 golds – put together.

Fair to say that all – or nearly all – of those medals were won on Speedmax skis, the Fischer’s crown effort in the racing department.

The Daily Skier recently went on a visit to the Fischer headquarters in Ried im Inkreiss, Austria, and, while it there a lot of exciting things to see & to talk about , there was but a little doubt where the conversation should start: Speedmax ( and yes, its meant to whet your appetite for reading more about the visit in later stories )

For such a successful technology, there is surprisingly little is written & could be found on Google about Speedmax. 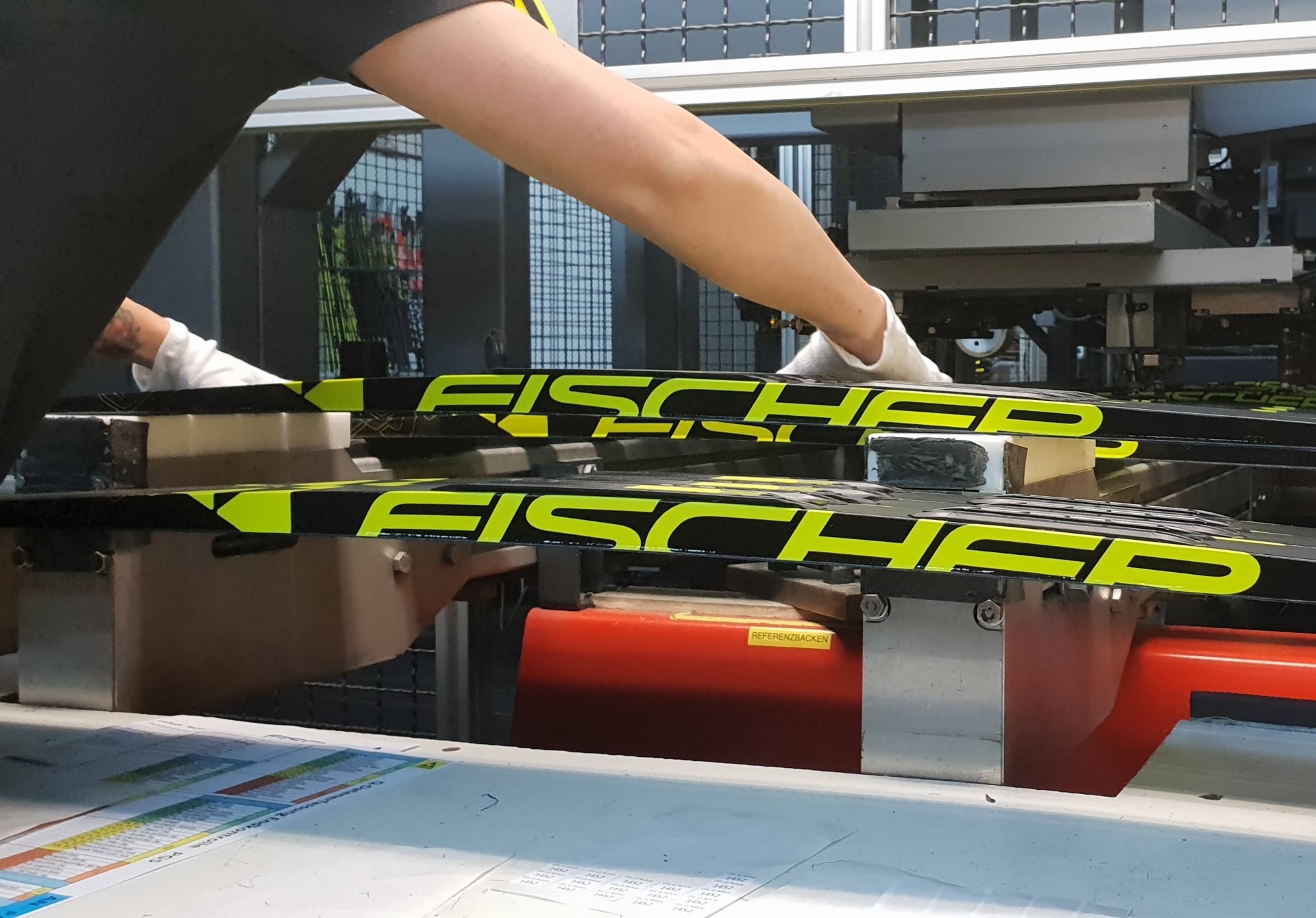 In a nutshell: Speedmax is brand-name of the complex of technological

innovations, the most important of which is the so-called Cold Base Bonding. All the other top racing skis – including Fischer’s very own Carbonlite series – are produced by putting all the elements of construction – the core, the lamination AND the base – into a specially designed press and applying a lot ( as in over 100C. “ a lot”) heat and pressure simultaneously.

Not Speedmax. In the production process everything is put together as described above – but the base. That one is being “glued”, bonded to the rest of the skis afterwards – and without comparable heat i.e. “cold’”. The actual process is complicated, costly, covered by patents – and is, probably, Fischer’s most important technological secret.

The very fact that the base material is not affected by heat & pressure changes tribological ( here’s the smart word of the day for you) properties quite dramatically. It does not kill the competition outright , the way Kneissl and Fischer fiberglass skis killed the wooden skis back in 1974 – no, skiers competing on Atomic, Salomon, Madshus and Rossignol still could run & win, – but it seems to often give a Fischer skier a decisive edge. And their waxers -less headache in the morning before the race start.

You may also like:  Yeezys And Speedmaxes Or How To Make Skiing Cool

No, the Daily Skier was not allowed to see the “magical process” of final stages of Speedmax birth – to the best of our knowledge, no media ever was. But we got it even better for you: here’s a conversation with key Fischer Nordic people, taking time off their work to talk about it.

– Thomas Drindl , Head of Division Nordic
– Tanja Winterhalder, Sports Marketing & PR Nordic
– Hans Hubinger, Head of Product & Development Race Ski Nordic – and the “father” of Speedmax and pretty much every model of Fischer racing skis in his 32 years with a company.

TD ( Thomas Drindl) .- “ … When Hans initially came up with the idea of making racing skis with Cold Base Bonding my first reaction was “ What!? You did not sleep well in the last week or what? – that was so unusual what he was suggesting. It be fair to say that we turned the ski production process upside down with that technology”.

HH ( Hans Hubinger ) “It cost millions of euros to develop. Not only the press to bond base to the rest of the skis, but all processes behind it and afterwards. But it had to be done – to answer the growing demands of skiers and waxing specialists to real champion skis is only possible with this system. Some precise production is required – and the Speedmax process is underpinning it.

Was it worth money and effort?
HH: YES, absolutely!
Could all those Olympic medals Fischer is proud of have been won on, say, Carbonlites?
HH. “No, for sure not!”

Before you decided to call it Speedmax, it was called HM. Whats HM stands for?

HH. “The final product that was actually called Speedmax came out in time for the Olympic Games- 2014 in Sochi” 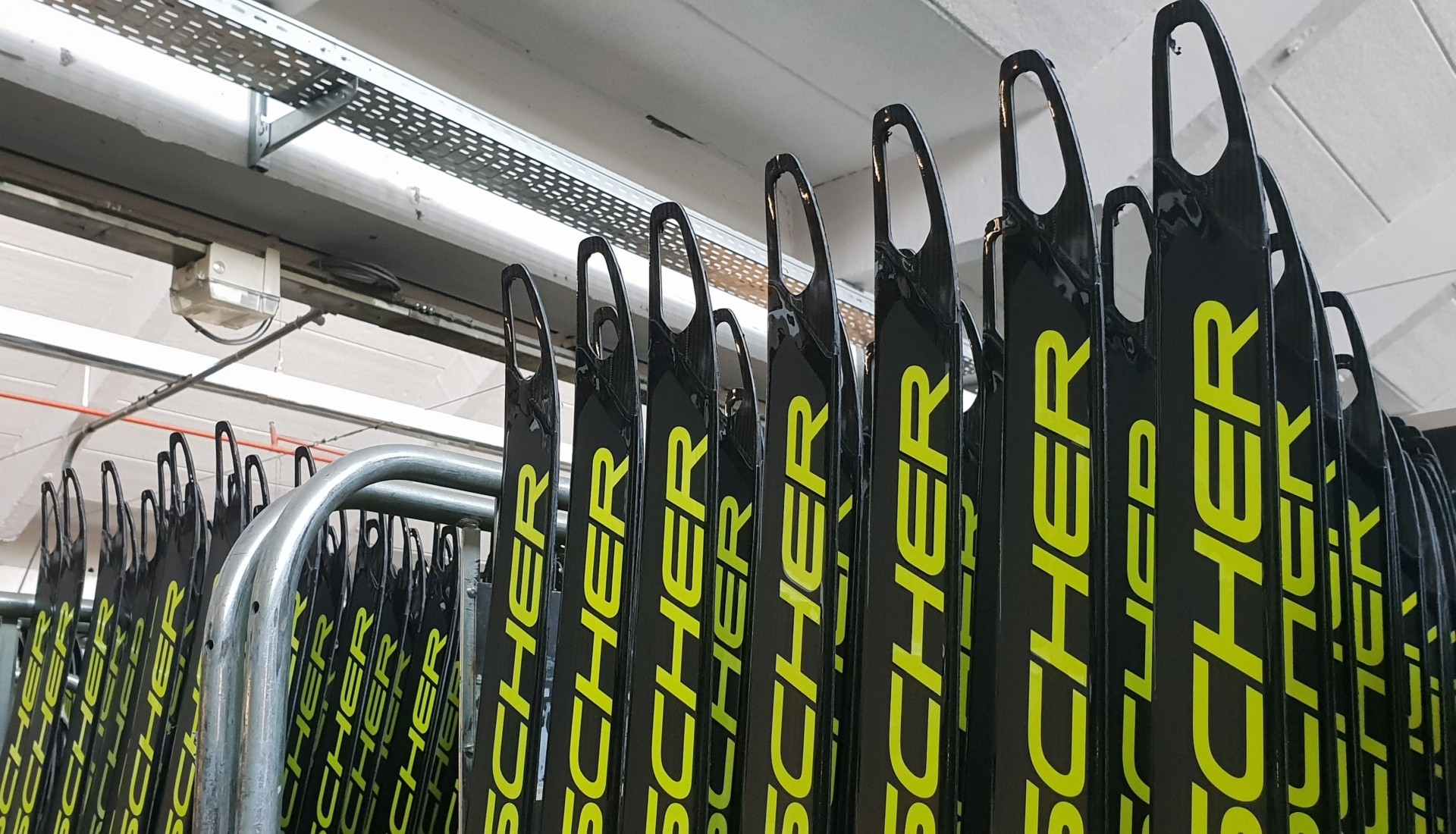 HH. “Materials used are very similar. What changed is a production process. We are far away from 2010 or 2012 on that. You will not see the difference when you look at the skis – the difference is inside”

Production of thousands of skis teaches you and helps to improve the quality. We know have a much higher percentage of skis fit for the best of athletes than when we just started. Tolerances are so much tighter now.”

Good morning! Today we are reporting from one of the most exciting places on Earth for any warm-blooded xcskier. The gentleman on the left is Daniel Pointecker. He is responsible for your @fischernordic dreams taking physical shape. The gentleman on the right is legendary Hans Hubinger. In his 32 years with the company he designed pretty much every pair of racing skis that came out of Ried im Innkreis. Speedmax is his brainchild. This is the Fischer Nordic Racing Ski production line and @daily_skier is there to tell and show you how Fischer skis are designed – and what they are made of, literally. #langrenn #langlauf #лыжныегонки #xcski #crosscountry #rollerski #hiihto #nordic #лыжи #skidefond #Speedmax #Fischer

You’ve spent millions developing Speedmax, you obviously expect to make a return on your investment, but you have told me that Speedmax are might not be the ideal skis for amateurs”. Appreciate your honesty – but how does it work from marketing point of view?

TW: “Of course, Speedmax could be used by amateurs. But you have to have a decent level of technique, the balance to use them properly. Otherwise there are other great racing skis we produce.”

TD. “Speedmax is all about fastest possible technologies. Those are the skis used in the World Cup… yes, to use Speedmax skis you need to have a certain level of technique..The entire range of skis is however affected by the Speedmax success and the good image we have.

– Did you manage to recoup you investments into the Speedmax technology?

TD “The development technology that led to production of Speedmax race ski was quite an investment and it would take some time until it paid back. But within Fischer group you do get money for such an investment and it´s one of our main goals for the future to maintain the No.1 position in Nordic skiing. We are a privately owned company – the decisions are reached and implemented much faster compared to the competition. And yes, Fischer family, the successors of the owners of the company are involved in business.

Is there a reason all Fischer racing skis look like Speedmax?

TD: “Speedmax are top-end skis and their design support sales of the cheaper skis. Whether you buy RCS or Carbonlite, you still should feel you are on top-level skis. There is a similarity in bikes where frames are often the same but difference is in customization of accessories”

Will the technology used in Speedmax be applied elsewhere?

TD “Yes, Cold Base Bonding is to be expanded down the line as well – not now but in the near future”