… This is the first time they do interview together, as a couple –
Bolshunov is known for his aversion to media exposure – and it’s about them, what helps them to win and their relationship. Well, mostly…

… First impressions are often the most lasting. One senses how close they are as a couple the moment they sit down for interview. The can’t stop laughing and poking each other playfully.
In fact, about the only time Bolshunov, who is normally serious, even scornful (“ concentrated” he says about himself) looks positively happy and relaxed is in the presence of Anna. 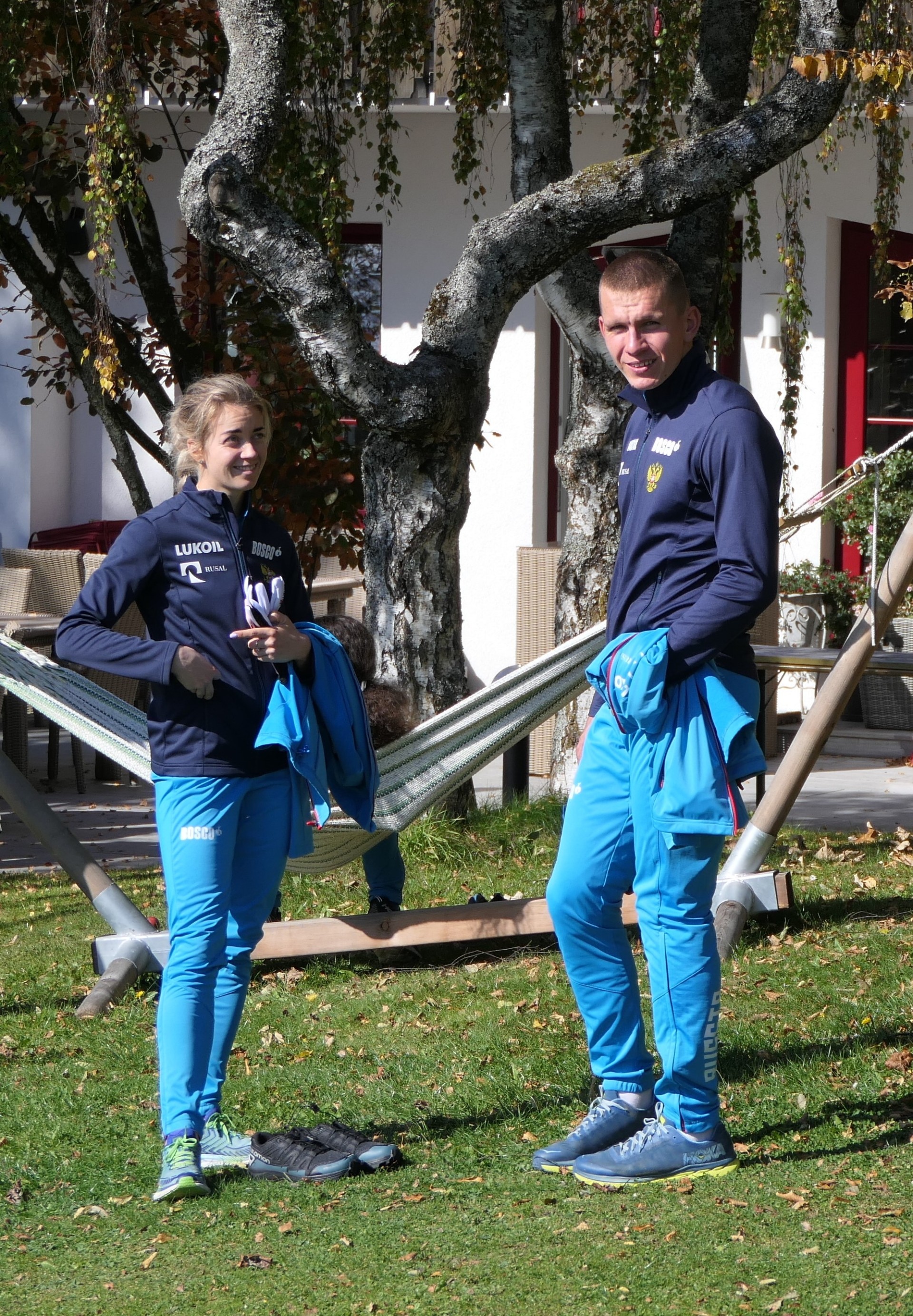 They met three years ago. Or , rather, Alexander started showing interest. But Anna was “ too slow on uppick” ( both laugh).

Professional cross country skiing is time & effort intensive in extreme. Elite skiers spend 250+ days a year in training camps or competing in season. It’s hard to develop and maintain any semblance of private life outside this tight circle. But that’s clearly not Zherebyateva and Bolshunov’s problem – they are in the same training group and have been there for some time.

The Russian team is split into 4 groups each lead by a senior trainer = there is no Team A, B and so on, all groups are considered equal in status. They train/travel separately from the other groups. All but one is of mixed gender. Anna and Alexander are both with one lead by a senior coach Yuri Borodavko – widely considered to be the one with toughest training regimen of all fours.

The media, especially the Scandinavian ones, have started playing up Klaebo vs Bolshunov stand-off last year – and as far as media goes, for a good reason. Both are fantastically young for their sport and both incredibly talented, together re-writing every notion about age of maturity in xcskiing. Klaebo won three golden medals at the Olympics in PyeongChang this year, Bolshunov already got two silvers and a bronze when he was on track to become the youngest Olympic champion ever in the most prestigeous 50k distance, but made a tactical mistake and finished second. The one thing Alexander does not want to talk about is that race.

You may also like:  Reactions To Norwegians Dropping Out Of North American World Cup Stages

Bolshunov frowns: “I am tired of every reporter always asking me about what I think about Johannes” – and suddenly smiles to Anna: “Remember the pig? “

…This April a Norwegian prodigy went on vacations to Bahamas and swam with wild pigs on a remote island, as everybody does out there these days.

Not a month passed – and Zherebyateva-Bolshunov power duo have posted their version of “me with a swimming pig” which everybody tool as back-at-you.

Except that their photos were taken on sandy dunes of Vietnam which is far closer to travel than Bahamas, looking from Russia ( the pig was real, they swear – and really liked swimming as well – just like his distant Caribean relatives). Both laugh remembering how fans of both ( of which there are hundreds of thousands by now) reacted.

… Both flatly reject an attempt to talk about their chances and aspirations in the upcoming season. Bolshunov pointedly denies that he is in agreement with those who think the current schedule of the World Cup is favoring him in any way. “I’d like to see a lot more classic sprints than there are now”

Yet while asked what impresses him the most in Norway, he does not hesitate a second: long, 50k tracks of Trondheim. That – and the amount of fans cross country skiing competitions attract down there. Cross country skiing in Russia is hugely popular as an exercise – but not as spectators’ sport. Not yet

Would either of them like to run a Vasaloppet? . “I would” says Alexander. “No way, quickly exclaims Anna – doublepoling for 90k is sooo not my cup of tea!”

Speaking of tea – clear favorite with both of them so should you ever invite the young Russians over, do not dwell too much as to what to offer the.

– You spend so much time traveling, training and competing together. Training is exhausting and so is travel after a while. Do you get tired of each other? Do you fight?

“Fight? Perhaps, we do – but I can’t quite remember when or about what” laughs Anna. “You know, we are just really happy with each other and we know how to support one another”

After his success at the Olympics Bolshunov woke up famous in in his home country. Famous – and suddenly quite rich: among the prizes are an apartment from the oil city of Tyumen where currently resides, a swanky BMW ( “assembled in Russia”) SUV, a hundreds of thousands of dollars in cash bonuses. Quite a bit to make a head of any 21 year old spin. Not Bolshunov it seems, though. Morever, an attempt to steer a conversation towards money and bonuses makes him clearly uncomfortable and he starts looking at his watch while casting pointed glances at Anna – so we have to pull out our trump card: 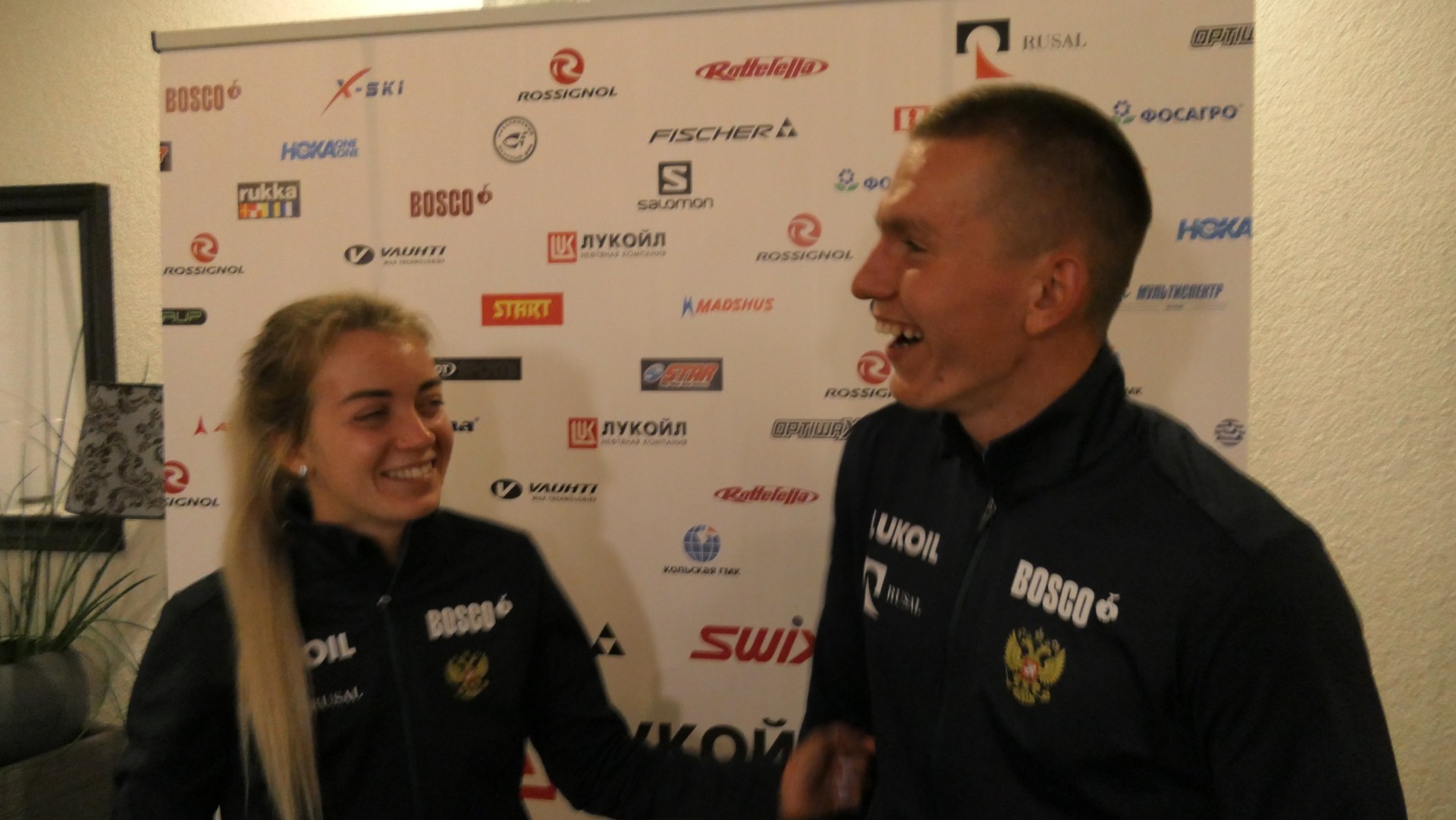 …Would they like to see mixed relay, like in biathlon, to come to cross country skiing? “Totally!” exclaim both at once. There is no need to ask who either sees as a teammate. “I’d do my very , very best were I to run a mixed relay with Anya” says an Olympic medalist with such a gravity in his voice, that should run wave of chill down in a spine of any potential competitor. Too bad the International Skiing Federation FIS has currently no plans for the one: Imagine Bolshunovs vs Klaebo and his teammate, whoever that might be?

..Conversation drifts back to Klaebo…Color Pink, that Johannes likes to popularize ? “I can relay says Anna – my “lucky buff”is of that color”

Favorite food? ” Porridge – any type of porridge. We can eat a lot of that. And tea, we much prefer tea to coffee”

Klaebo -edition rollerskis ( IDTs – identical to the ones the Russian team is using)? Huge posters with the young Norwegian advertizing his poles ( Leki)? “Yes, I wouldn’t mind Bolshunov-edition something from Rossignol” – Bolshunov is currently the only skier in the whole big Russian team who is on Rossignol and stresses that he’s really happy with amount of support he gets from his material sponsor ( Anna is listening carefully – she’s a Fischer Athlete and after the interview she has a meeting with a company representative to discuss some issues that arose)

“I really feel that I do not train enough” says Bolshunov suddenly. The irony is, the group they both are at i is considered to have the toughest regimen of all. The next day both are expected to give it all in a brutal uphill interval training session, so conversation gets wrapped up. They get up, say their farewell and leave in that springy walk of young people doing almost a hundred hours of hard training per month. Just a happy pair of 21 year olds who found each other – and their meaning of life. 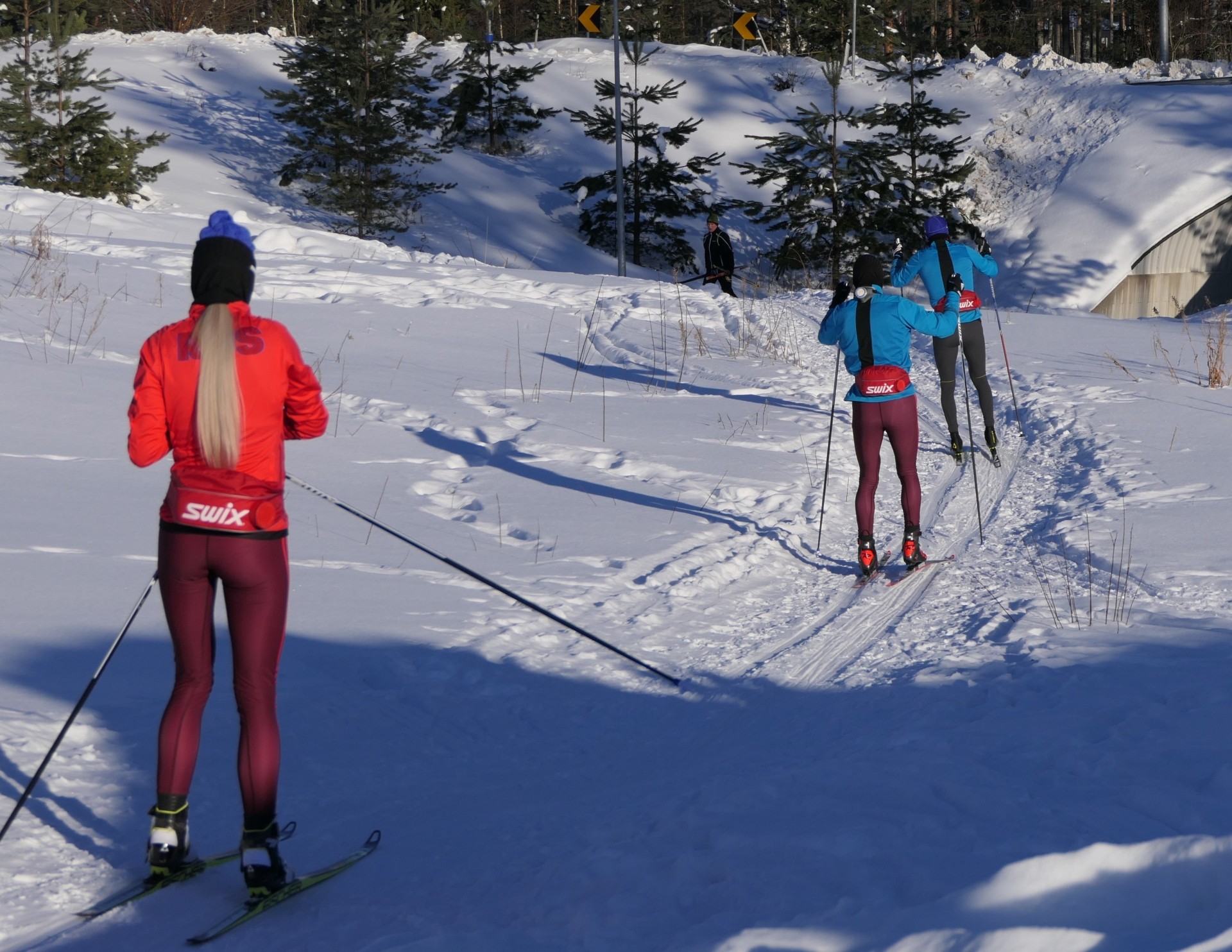