There is a chance that you’ve been to Berlin at least once in your life. Or want/plan on coming there. There is no other city in the world that epitomizes the history of the XXth century more than the German capital.

And if you’ve been to Berlin, the chances are you dropped by Tempelhof Airfield, the location as worth visiting as any other monument in the city. The place has many claims to fame , but two really stand out:

– It was the world’s first true airport at the time where planes elsewhere were pretty much unloading passengers into shacks – built in the 1930s to impress, to fascinate, to regale a visitor.

– It is also the world’s very first large airport to be decommissioned and turned into a huge sport & entertainment facility barely a 15 minute drive ( or a short subway trip) from the very heart of the German capital.

Tempelhof airfield has two runways, each of approx. 2000m of near-perfectly smooth if somewhat dense tarmac – make sure your ferrules are sharp. It's too flat for a proper aerobic training – as one would expect from an airfield – but ideal for technique honing or just for a quick fun in the middle of the city minus dangerous car traffic. #langrenn #langlauf #nordic #xcski #лыжныегонки #лыжероллеры @nordischaktiv #rollerski #tempelhof

And now to rollerskiing. A 6 kilometer lap of part perfect/ part decent asphalt track runs on a perimeter – replete with historic signposts in English, courtesy of the times USAF base was located at Tempelhof.

There are also two fully survived runways that huge Boeings and Airbuses were using mere ten years ago, until airport got closed. Either is about 2000m long and as wide “rollerski track”| as you could possibly imagine. 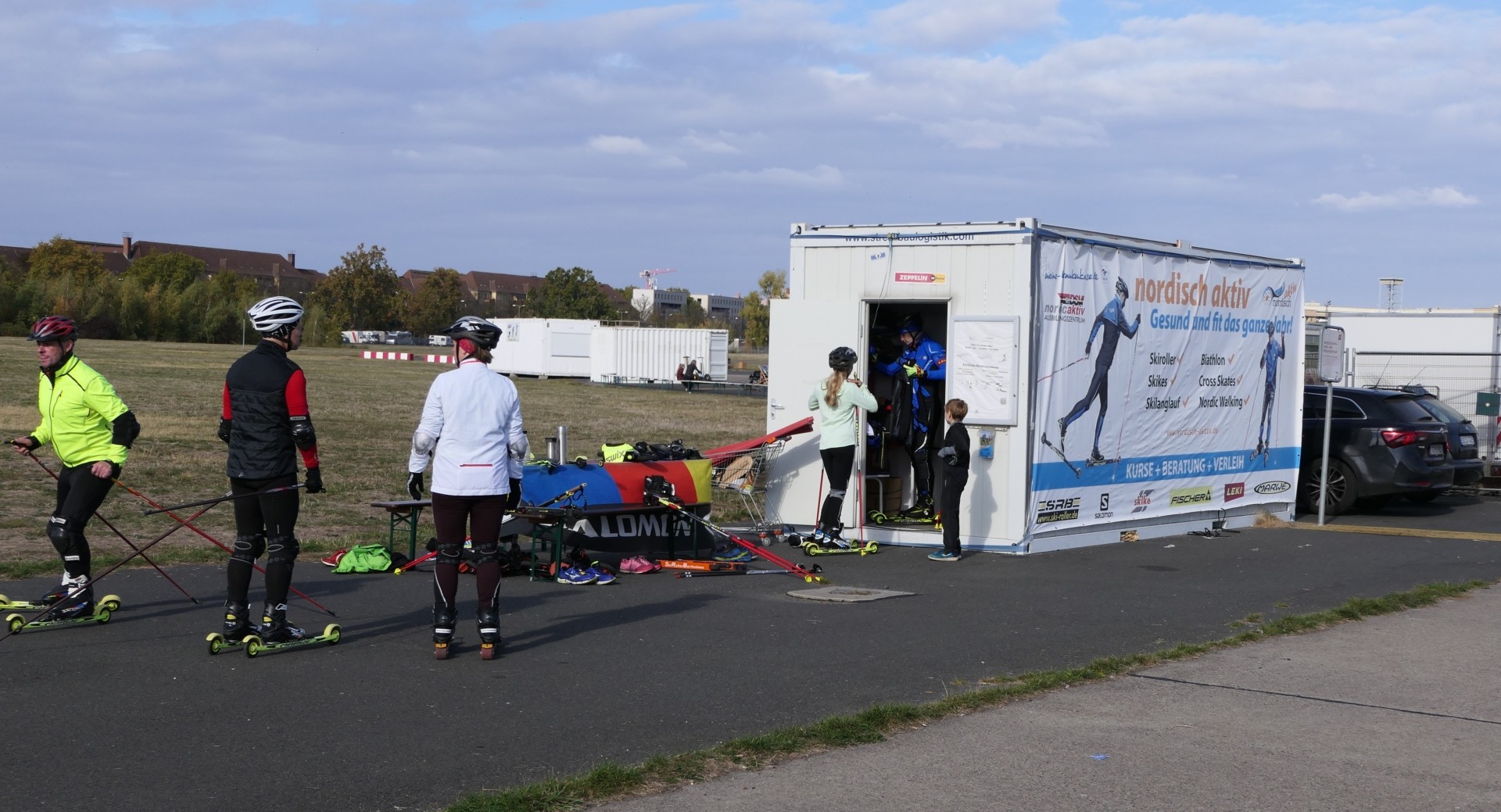 And in the middle of all that stands a converted container that says Nordisch Aktiv. Gesund und fit das ganze Jahr or “Healthy and Fit All Year Around”, featuring a photo of skier putting on display his technique. Meet Carsten Bartel, co-founder of the Berlin’s best known cross country ski training club & courses, “DSV Nordisch Aktiv Ausbildungszentrum”:

“Rollerskiing is the best sport in the world. You have a full body workout and a perfect cardiovascular workout in the nature. All you need is a pair of roller skis, boots and poles.
We have our Skirollerzentrum in Tempelhof, probably the largest sports park in the world. There we offer courses, rental and personal training on skirollers. Thomas and I offer highly professional training for every level, whether for tourists or for athletes”

Both Mr. Bartel and his partner Thomas Staacks are what the Germans call Trainer-A-Lizenz or top coach qualification holders that one needs to confirm periodically with DSV, the German Ski Union.

How popular is skiing/rollerskiing in 3.5 million Berlin? Well, it is – and it isn’t. The rollerskiing tends to be associated closely – still – with actual snow skiing. And Berlin winters of the last decades were not exactly snowy – closest snow skiing one could find, even using Autobahn speeds, is about 2.5 hours away – and that’s on a good winter. 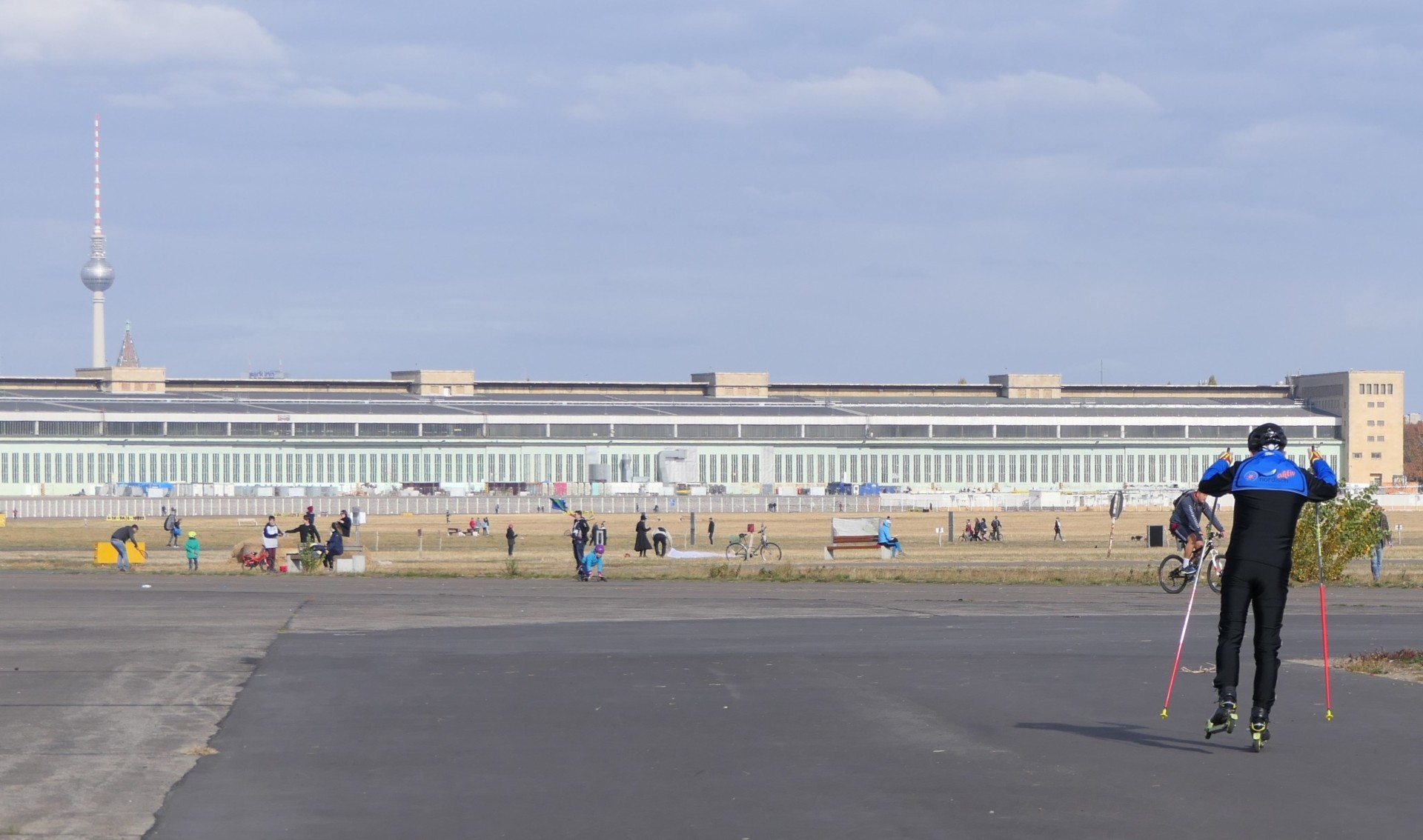 However, the exposure of the sport is growing – thanks in part to biathlon and Nordic Combined, two sports Germans dominate and that get wall-to-wall coverage on main national TV channels.

There are more and more people who are willing to give the (roller) skiing a try, attracted by combination of television exposure and media stories extolling the benefits of skiing. 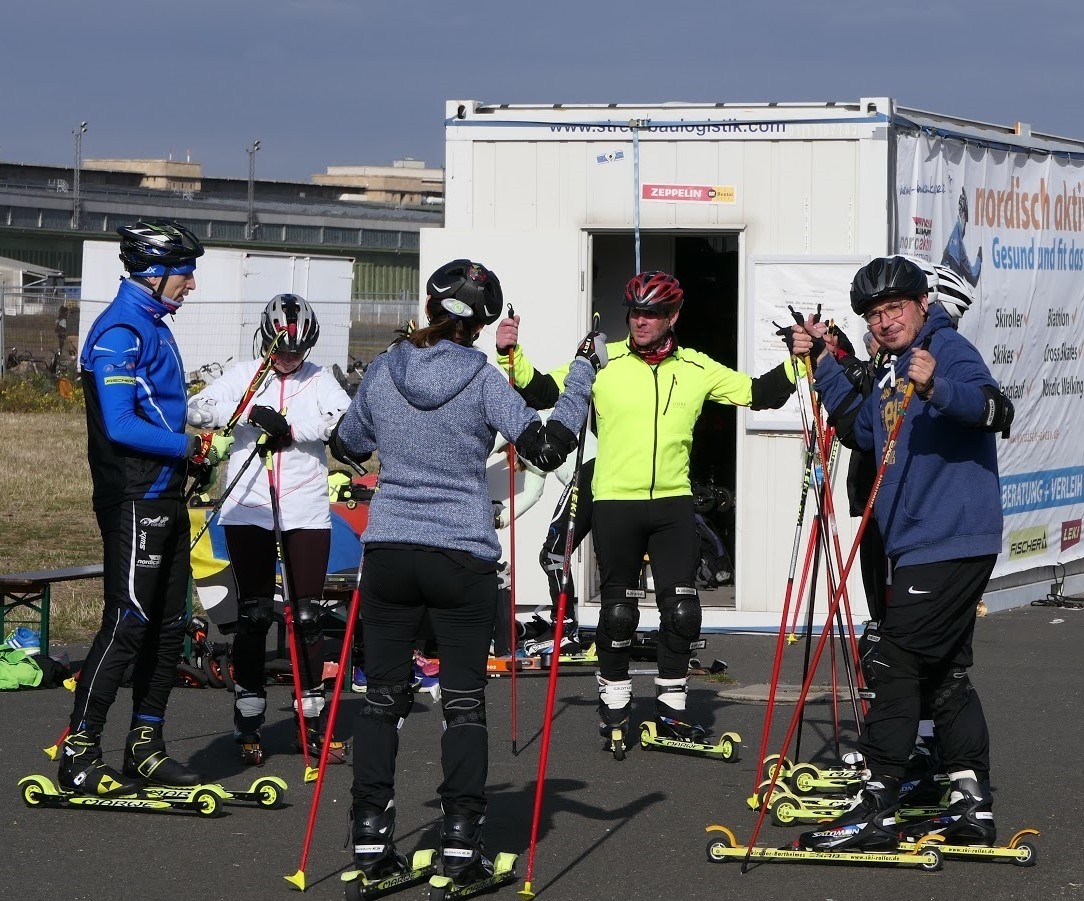 Stefan Ludwig, lawyer from Berlin and first-time rollerskier at Tempelhof

“I’ve read that one uses more muscle groups while skiing than doing any other sport – and today I feel it in every centimeter of my body ( laughs). My girlfriend and I have decided to give it a try because it looks like a reasonable compromise: I like downhill skiing and she doesn’t – and this one is somewhere in-between”

Tempelhof is, perhaps, best known rollerski track in Berlin & environs – but far from being the only one. Together with good folks of Nordisch Aktiv, we at DailySkier will continue presenting you ideas and options for your next vacations, so the trip to one of the world’s greatest capitals will exercise not only your inquisitive mind – but your exercise-striving body too! Stand by 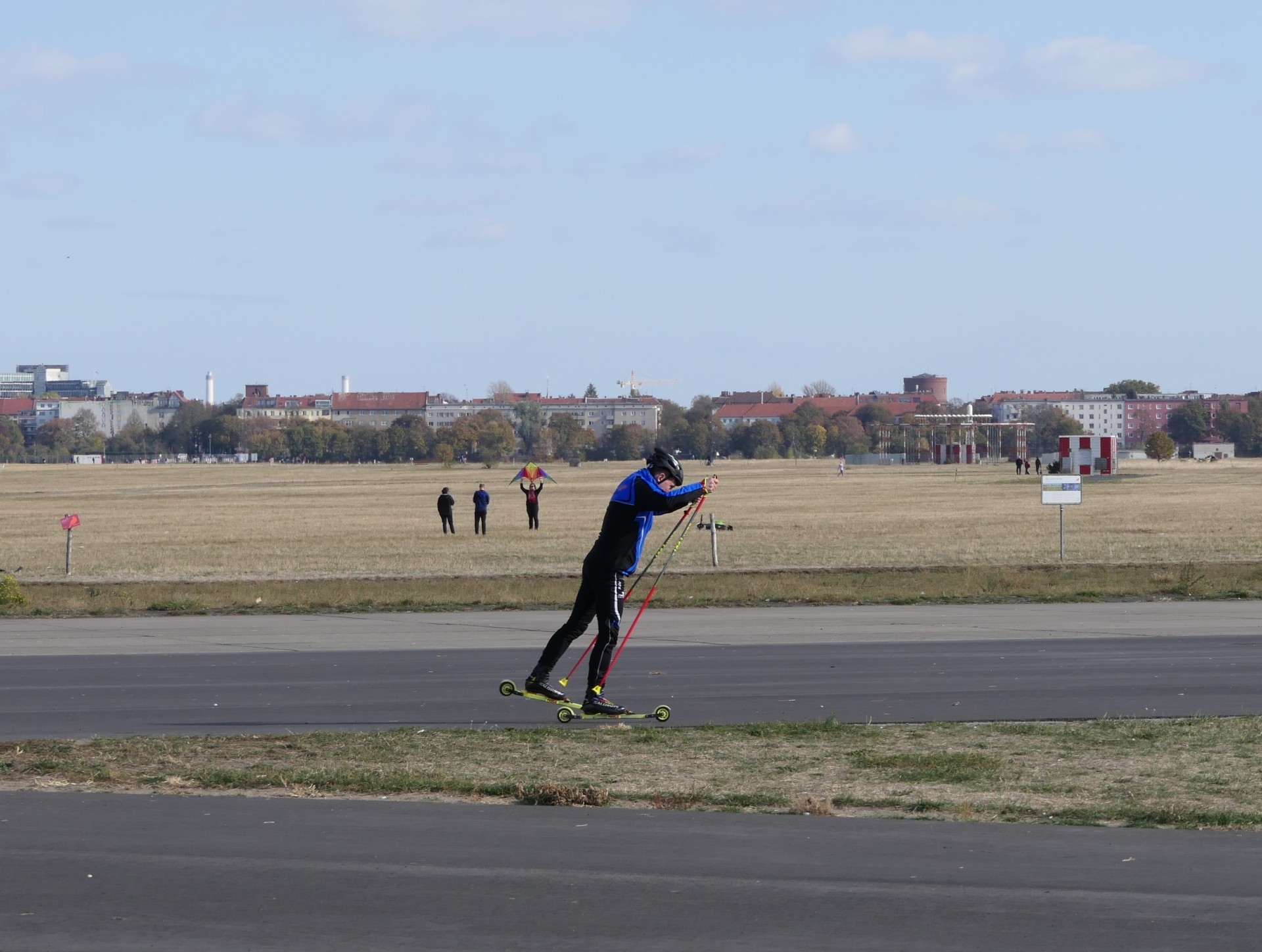 You may also like:  Poll: Majority Of Norwegians No Longer Believe In Doping-Free Skiing