One sub-genre we love at the Daily Skier is talking to people who combine successful work career with high-level sporting performances. Here, for instance, is a life story of Annika Sjöström, a biathlete and a software engineer at Valmet, Finland. 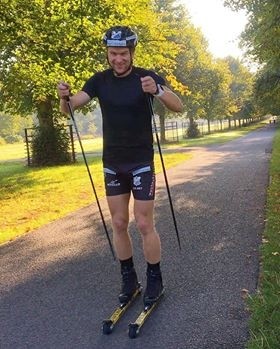 Today it’s Vegard Vinje’s turn to be introduced & interviewed.
Mr. Vinje is working in the cutting-edge field of science where medicine meets math. He is also a very, very strong skier, running with the world’s best both in sprints and long distance races.

A 27 year old Norwegian is also well known for exotic locations he trains at – thanks to his scientific career, that takes him to places where a top skier rarely sets foot onto – like London, UK, where he currently resides.

You got to be London’s strongest resident skier currently. But the place is not exactly skiing- friendly – traffic, tight streets, indigenous population that hitherto was not in contact with the great sport of ( roller) skiing. How do you beat it?

At first, I only went to the parks, but gradually I tried to move onto some roads as well. To cope with the traffic-issue, I just have to get up really early. If I’m out at 6:30-7:00 there is usually very little traffic, especially in the weekends. I’ve done three long exploration trips as well going from London to Brighton, Southampton and a little past Cambridge. Here in London mostly go by myself: I am the only one that dares to go skiing in the traffic. To do some easy social skiing I meet up with the roller ski club in London, and sometimes we do hill interval together as well. I’ve also done some sessions with Joseph Rosenfeld, one of the juniors in the British Nordic ski team, and Einar Kristjansson from Iceland who visited London for work during the summer.

What are most popular ( with them – not with you) things Londoners shout at you when you fly by them on your Swenors?

Most common phrases I hear are: “That’s so cool”, “What are those?”, and “Go on son!”. Kids usually just shout out “He is skiing!” while pointing at me with a baffled face

In all seriousness – how could you prepare for Marcialonga or Vasaloppet in London? What are the methods, advise and secrets big & small for preps in such a locale ?

My motivation for skiing is good at the moment, so preparations are going well! I would say I do things a little different than most my competitors at times. First of all, hours per week vary, A LOT. First two weeks of September consisted of 4 and 7 hours of training. During the summer, I also had some weeks with little to none training, due to traveling to conferences and meetings. This has allowed me to train very good in weeks with less work and at vacation. Another thing I’m fond of is the extra activity from commuting 7 km each way to work either by bike or by foot (walk or slow run). I’ve always liked to experiment with training, for instance this Easter, I went 630 km in 7 days, and it actually was pretty good for my shape going into Ylläs-Levi. Also in May, just before two weeks of traveling with work, I tried out 12 interval-sessions in 6 days! My longest trip on skis so far is 130 km, while on rollerskis I’ve had trips of 130,140 and even 150 km this summer.

You may also like:  New Equipment Seen At World Cup In Davos

I believe most amateurs and semi-pros would get much more out of their training if they varied their training load from week to week. And not be afraid to try something extreme as long as it is followed by proper rest. Whether it is genes or environment is a very difficult question to answer. I’d say genetics play an important role. I can’t see any other reason I’m a decent sprinter at least. An important thing to remember is that Some people doesn’t even get better by training more hours. Look at Finn Haagen Krogh, he is not known for doing a lot of hours, and actually thought he did too much last year. He still did hundreds of hours less than Sundby who apparently felt he did too few.

If our brains were simple enough for us to understand them, we'd be so simple that we couldn't 🤔 #wcb2018

Please explain in layman terms what kind of research are you conducting at Simula Labs in Norway and what is that you are currently studying at University College London?

At Simula I am currently conducting research in biomechanics. We are trying to understand how fluid flows in and around the brain, and the importance of this fluid flow in clearing waste products from the brain. A loss of function in these flows have been linked with disease such as Alzheimer’s and Hydrocephalus (water on the head). Since experiments in humans are both expensive and risky, we build computer models to explore the waterscape of the brain to better understand how to prevent disease. University College London has some of the best researchers in this topic, and they are hosting me for a 6 month research visit .

Let’s go back to your skiing career. You compete in either classic sprints or long distance on a high level while skipping 15k and 30k ? Why is that?

As a junior, I used to be be better at sprints, but I was also decent at double poling. The last years, I have focused mostly on long-distance, and not been training much specifically for sprint. However I can manage a sprint much better than a 15 or 30k in hilly terrain. It might be because I’m not the lightest skier, and my O2 uptake is not that good. This winter, in the classic sprints, I felt I was struggling to keep up with the all rounders and sprinters in uphill diagonal running. So I am not sure wether I will compete in sprint the coming season or not. It certainly requires two different training regimes.

Double interesting because these days long distance is all about doublepoling and sprint is about diagonal and/or “Klaebo uphill style”… doesn’t it imply very different training regimen? How many hours per week /month are you training typically – both in and off-season?

This is my third season since I returned from football and I have been increasing my training load gradually. Last year I did about 50 hours/month on average. I’m aware that I’ve been training less than many of my competitors for the last years. This year I’ve stepped up the hours, so it will be interesting to see the result. More is not always better. This year, however, I have been doing more like 70 hours/month since May. I believe a great amount of training during the season is key, so I try to keep up the same amount in-season. Also I’d try to avoid unnecessary traveling to save energy as I find traveling a bit exhausting.

Do you regret dropping skiing in favor of football at 18? And what made you to return to skiing?

I was sick two seasons in a row and wanted to try different things in life as well. I don’t regret at all as I had some fantastic experiences with Lyn Fotball, climbing up the league system, and playing in the famous city derby between Lyn and Vålerenga in front of 11000 supporters in the Norwegian championship. I also made great friends in the team I still have today. When our team was promoted to the 2nd division, I was in and out of the team, and was also struggling with a heel injury. The injury got worse and I needed surgery, setting me on the sideline for a year. Good thing is, that double poling was no problem, and therefore I just went for long-distance skiing, met the great teammates in Lyn Ski and got inspired to start training for competitions, and here I am three years later.

Back home, being a member of Lyn Ski, how often do you train with Kruger, Holund?

I am very proud of Lyn Ski and what Hans Christer and Simen have achieved! They train mostly with the national team, but drop in at sessions with us occasionally. They both understand the importance of their achievements, while still being very humble and down to earth about it. They support the youngsters as well, sometimes showing up on local races and doing training sessions with the hopeful skiers.

On top of pursuing your scientific career and running & finishing world’s most famous long distance races in top 20-30-40, you are also a “utøver og lagssjef” or, to put it simple, the boss of the Lyn Ski long distance team. There are only so many hours in each day. How do you manage it all?

Managing LYN SKI Moseteråsen has been a bit difficult from London, but I’ll get a bit more into it when I get back to Oslo, getting everything ready for the upcoming season. My philosophy on work-life (or work-training) balance is to be effective when I’m at work. If I am not, I usually just go to do something else. On average I spend 40 hours a week at work, so there are still a lot of hours for other things. Also waking up early in the morning helps a lot. I usually don’t get anything productive done late evening or night anyways.

Looking forward, say 5-10 years, what do you see yourself doing? Will you doctorate in applied mathematics and medicine be somehow used to the benefit of growing & training future klaebos?

The next few seasons will determine how my skiing career will progress. I am super happy with the situation at the moment, but If I am not taking steps towards the absolute top, I will not keep increasing my training as much in the coming years. That would require a more professional lifestyle with a bit less work. Therefore, In 5-10 years I most probably have a normal job either in some technical industry or in research and doing skiing at a reasonably good level .

At this point we are not doing research in exercise and training. That being said, fluid flow in the brain has been shown to increase in mice when they run in their little wheel. Also we know that heart pulsations and deep breathing drives fluid flow in the human brain. It would be interesting to do more research on why training is not only good for your muscles but also for your mind.