800€ for a pair of ski boots made by a company you probably never heard of?

Firstly, you get something truly exclusive ( initial production will not exceed 120 pairs).

Secondly , we live in the world where, in closest sporting equivalent to cross country skiing, there are people who are ready to pay 1.000 € for Mavic Comete Ultimate .

Thirdly – and the most importantly – the new ultimate boots are produced by the same very people who were behind one of the most talked about – and the least publicized – projects, that of Salomon Carbon boots used by a chosen few athletes at the Olympics of 2014.

…like Charlotte Kalla, probably the biggest star of those Games, sporting them Gignoux-Salomon in Sochi.

The Daily Skier got in touch with good folks of Pierre Gignoux Carbon Ski Boots from Saint-Martin-d’Uriage in the French Alps, just outside of Grenoble, to ask what makes them THAT special

– So, what are the chief advantages of Gignoux Skate 300 over the best models competition could offer e.g. Alpina ESK 2.0, Fischer Speedmax, Madshus Redline and other premium carbon sole boots?

– The first advantage of our shoe is the weight. Our Skate 300 are 30% lighter than our competitors. 325g against 470g for the Salomon SLab Carbon Skate. It reduces a lot the inertia for the feet. In uphill in particular, thanks to this low weight, it is much more easy to be in up-skate. The skier will make larger steps using the same amount of energy. On flat parts, it is also very comfortable to have a dynamic move at the end of the push.

The weight is not the only advantage, indeed the shoe is very comfortable. The internal lacing system allow a perfect adjustment to any morphology of foot with an adaptative wrapping. Moreover, the toe box is wide, allowing an excellent thermicity. Coupled with a fully waterproof layer, you can be sure to keep your feet dry, even after 2 hours under heavy snow or rain showers ! The comfort is also improved thanks to a thermosettable removable liner.

The high resistance carbon fiber used for both parts of the shell (cuff and lower part) provides a high stiffness, in particular in torsion, for an excellent precision. We have tried to improve the gliding feeling by lowering as much as possible the heel. We have still a flexure zone at the metatarsal level for a dynamic response.

– When will you start taking orders for them?

The product is launched now, orders are possible on our website. We have a special lauching price of 800€ in limited edition with a possible increase of the price for next season.

– Only Skate or are there Classic and duathlon models coming?

*For now we lauch a product only for skating. For the end of the season, we want to check if our product meets the customers\s expectations. If we are successful and we feel a need from the customers for a classic shoe, we are able to produce it.

– Where are they made and , roughly how many pairs  you plan to  produce per year?

*They are fully made in our workshop in the French Alps. We are a small handicraft company (10 employees). Now, we are able to produce 600 pairs of ski mountaineering shoes per year. 120 pairs of Skate 300 for the first season would be a success.

– What customization/personalization options offered i.e can a skier order “made on spec” boots to fit his/her feet?

We have a wide shape inside the shoe for strong feet and a highly adaptative lacing system for thinner feet. We can’t make bespoke shoes but the liner is thermosettable. 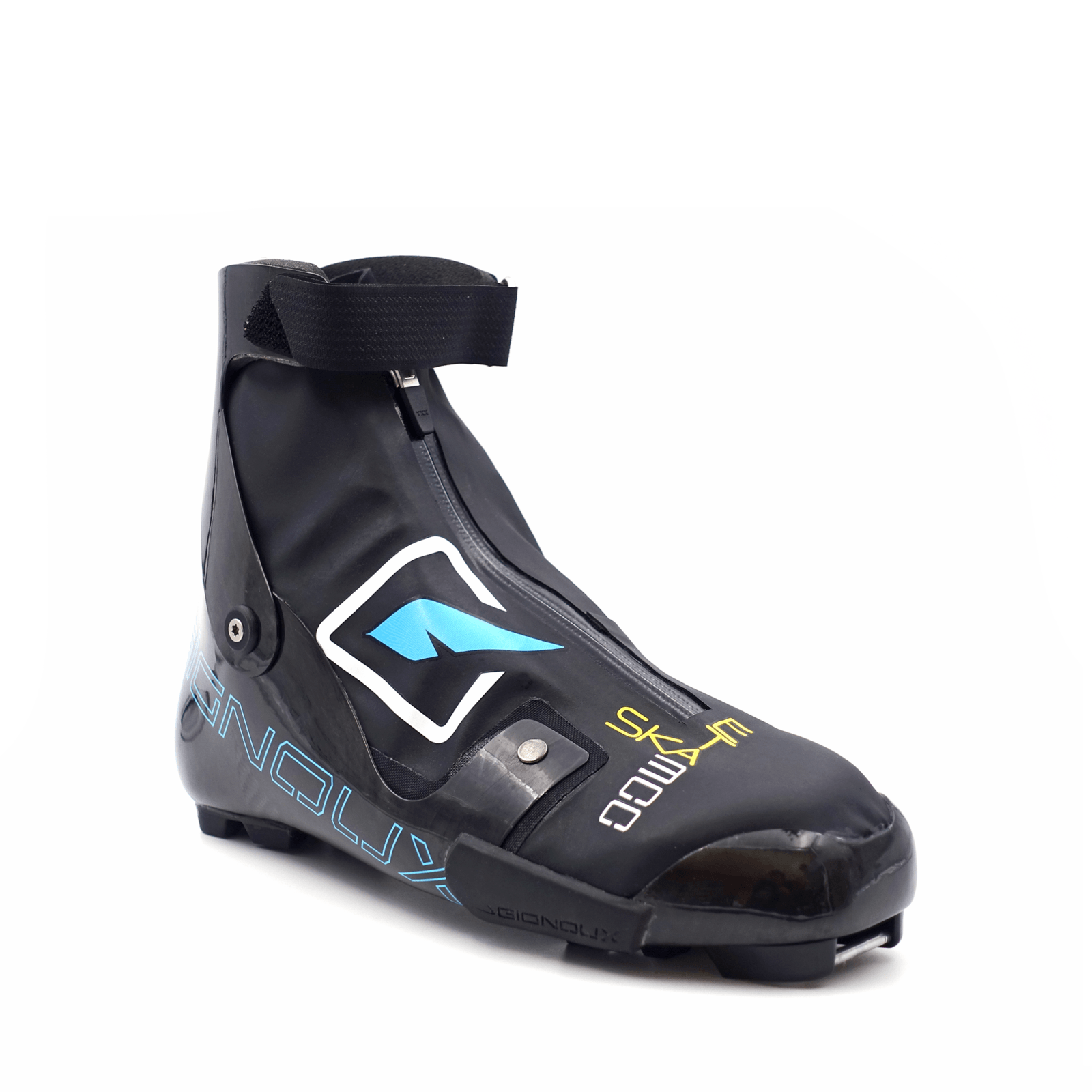 – “Why would I, hitherto happy user of Alpina or Salomon or Madshus or Rossi make a switch to Skate 300?

*The first testers of the Skate 300 told us that the shoe is very comfortable and the lightweight is a huge gain during long training session or long distance race. Some of them feel the shoes of our competitors too tight at the toe box level or have a pressure point and trying our shoes made them adopt our perfect fit with a wide toe box. Our shoes are also 100% handmade in a handicraft manner in our workshop in French Alps, for our first customers, it is a local product !

Let’s talk a little bit about Gignoux as a company. Your founder, Pierre Gignoux is best known for development of carbon xc ski boots that were produced under Salomon brand and were used by some of the best skiers around five years ago. But then the name Gignoux had disappeared from XCskiing. Why are you coming back to the the cross country skiing market – and why now, specifically?

* In 2011, we filed a patent concerning the bending zone of cross country ski boots. We sold this patent to Salomon and produced racing boots for Salomon/Atomic for 3 years. The boots we produced for Salomon/Atomic were exclusively for international athletes, they didn’t sell them. Those boots had a weight of 330g in size 42 (8.5US). Then, Salomon wanted to develop, produce and sell boots based on the patent we sold to them. In the negotiations we kept the possibility to develop and sell products by our own. Salomon had eventually developed a product which is way heavier than the shoes we made for them (470g in size 42, 8.5US). We thought we were able to bring a boot which doesn’t exist yet in the market, with a very lightweight. So we improved the boots we were making for Salomon and made it more comfortable, more waterproof and more performing while lightweight. The Skate 300 weight 300g in size 40 (7US) and 330g in 42(8.5US).

– Please clarify your current relationship with Salomon. Are the current versions of Salomon S/Lab Carbon boots underpinned by Gignoux technology? What about its sister brand, Atomic and their boots? Whats the main difference between  Salomon S/Lab Carbon and Skate 300?

The current S/Lab Carbon boots use the patent we sold to Salomon. It is the same for Atomic boots. The main difference with skate 300 is the weight, the Skate 300 is more than 30% lighter than S/Lab Carbon. We have also a shoe which is more waterproof. 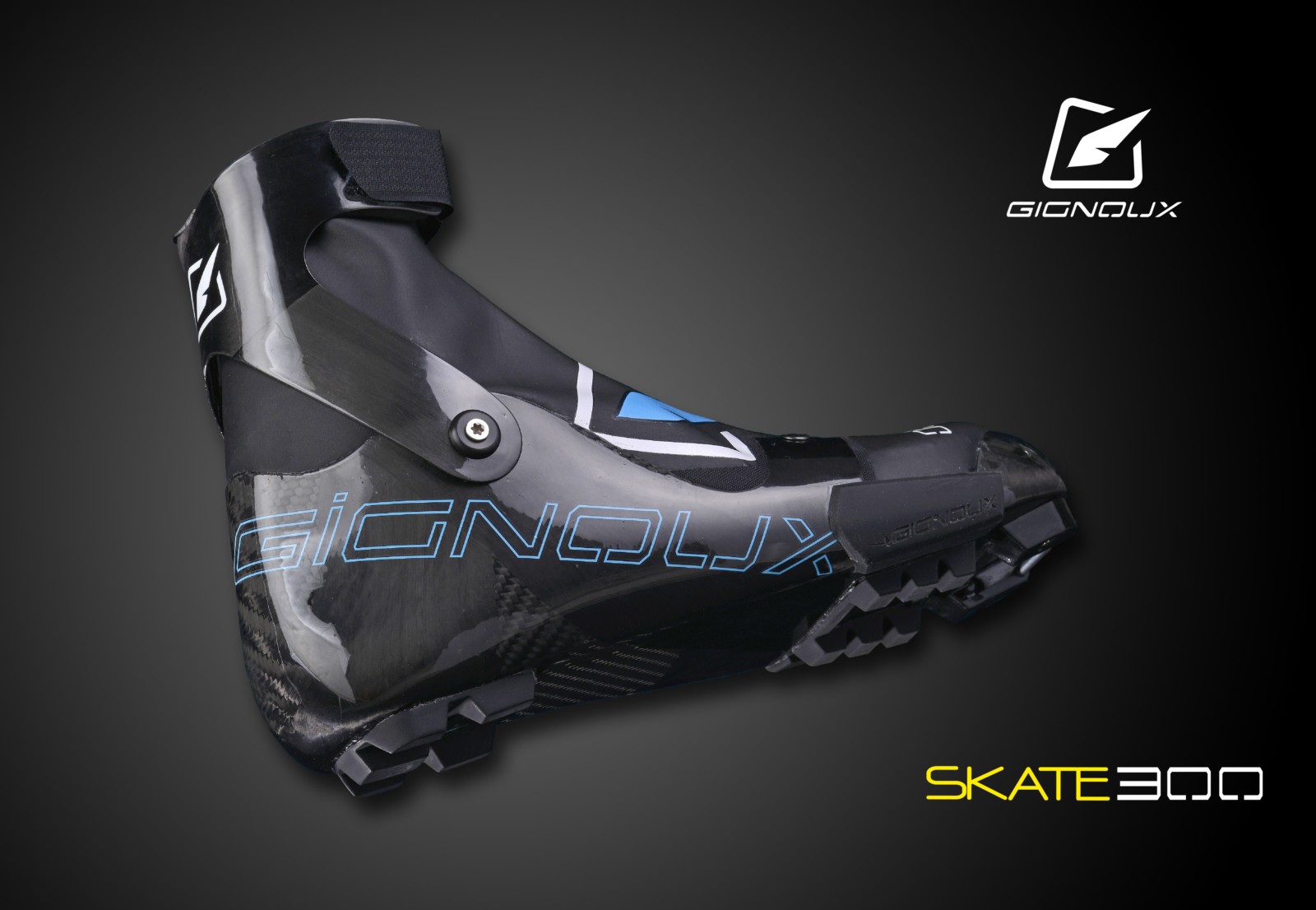 You may also like:  15K Freestyle At Olympics: Experience vs Youth