Russian skiing team reveals its secret substance: raw milk i.e. the milk straight from a cow, that has not been pasteurized,

European laws on sales of raw milk directly to end-customers vary considerably, with Austria being one of the most liberal with Vorzugsmilch – something that wouldn’t be possible in Canada or most of the US states that impose outright ban on raw milk sales to consumers.

The Russians must have a lot of trust in magic powers of Austrian bovine species: the FB blog of the Russian Cross Country Ski Federation ( quite informative and rather original) has published photos of its legendary manager, 76 year old Yuri Charkovsky personally loading a milk jug from a local farmer in Ramsau, Austria for his skiers at some farm near Ramsau where the team is currently training.

An address of the farmer who produces milk fit for Sergey Ustiugov & Co was not disclosed. 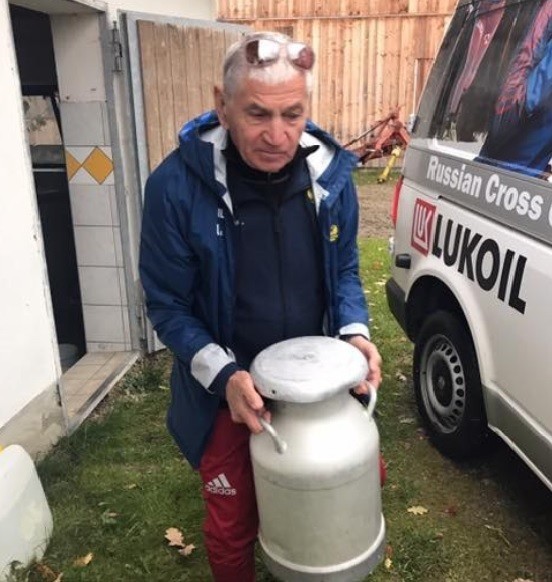 ‘The battle of magic drinks’ is heating up – a couple of weeks ago the US Olympic Committee website, Teamusa.org put out a story about “secret potion that could boost the performances of Team USA athletes at the Olympic and Paralympic Winter Games PyeongChang 2018”

The drink, ingredients of which are kept secret, was developed by Susie Parker-Simmons, a senior sport dietitian with the United States Olympic Committee,

You may also like:  Together On Ski Tracks & In Life: 5 Ski-Families