The story goes as follows:

2008, Ostersund, Sweden, biathlon World Cup stage.
– “Describe yourself in one word” a Norwegian television reporter asks a bi-athlete he interviews
– “Sexy” replies a 22-year old Russian without a moment’s hesitation

Later same season Svetlana Sleptsova goes to prove that she could put money where her mouth is by appearing in front of the roaring crowds in Rhupolding wearing the racing suit that said just that: 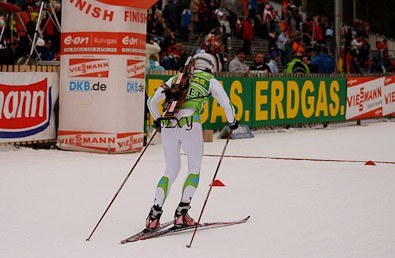 It was not only about catching media attention outside of the trail – the young Russian was ruling the World Cup circuit in those years together with Magdalena Neuner of Germany. Those two had a lot in common: both newcomers, both lightly built, with unstable shooting that was more often than not compensated by speed on the skiing circuit.

Unlike Neuner, Sleptsova never won an individual World Championships or Olympic race – but was instrumental in the Russian relay victories in  Pyeongchang-2009 and in Vancouver-2010.

Unlike Neuner, who resigned at the peak of her fame, Sleptsova has continued to perform, but her results have gradually gone down – some speculate, in many ways due to her character that she herself once described as “untameable”. Fans loved it – coaches and federation officials not so much.

However, last week a 31-year old put a finishing touch to her career, that made many a commentator remember her best days: by winning all three races at the IBU Summer Biathlon World Championships at Chaykovskiy, Russia – sprint, pursuit and relay. And then announcing to the jubilant home crowd that she is ”retiring from biathlon because she’s going to become a mother soon”

You may also like:  Somebody Is Selling Brand New Adidas Boots ...From Mid-1980s on EBay

Talk about leaving in style!

Photos courtesy of their respective owners via Rusbiatlon.ru