Last week, a monument to a skier was installed in Ufa, Russia. The monument is, apparently, to nobody in particular and a generic skier in bronze is meant to represent local people’s affection for the sport of cross country skiing. We could totally empathize with that!

The new statue, however, gives us an opportunity to talk about other statues to skiers elsewhere in the world.

There are statues, dedicated to active skiers:

Charlotte Kalla is the most successful Swedish female skier in recent years. She is also loved by fans. The authorities of her native town, Tarendo, established a statue depicting Kalla in summer 2010, after the Olympic Games in Vancouver, where she won gold and silver medals. The grand opening was on Charlotte’s 23rd birthday. Kalla said it was nice, and the statue was very similar to herself.

Swedes continued this trend, immortalizing Marcus Hellner after his phenomenal sprint victory in Oslo in 2011. The statue is made of wood, and it’s rather difficult to recognize Hellner without a signboard. However, Marcus said that it’s quite fun to see such an object of art. The monument is also located in the skier’s town of birth: Skoevde.

But Norwegians, Russians and Finns don’t rush to put up monuments to living skiers such as Bjoergen, Ustiugov, and Niskanen. In Trysil, there is a statue of 2-time Olympic Champion Hallgeir Brenden, erected only after his death in 2007.

In Petrozavodsk, we can see the monument of Olympic winner Fedor Terentiev, who tragically died in 1963. He was only 37 years old at the time. Terentiev is the first Olympic Champion from Karelia, and now all Karelian skiers can take a photo with their famous inspiration. 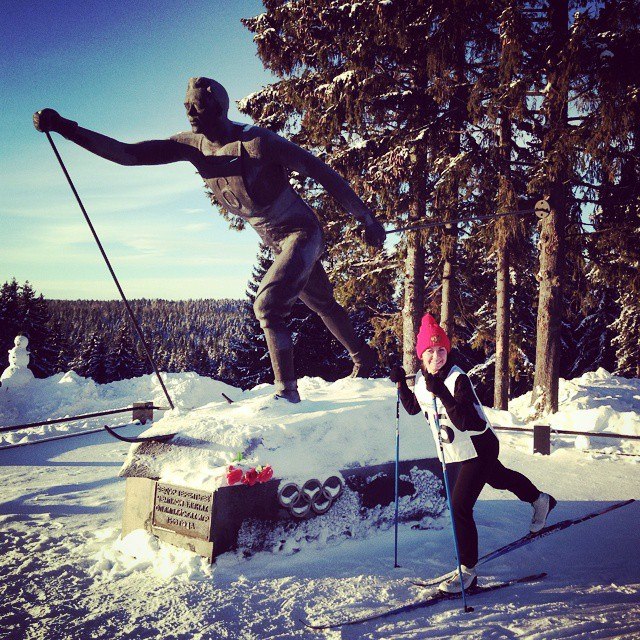 The Finns, meanwhile, created a statue for Eero Mäntyranta, dead 4 years ago. He thrice won the Olympic Games and earned the nickname “Mr. Seefeld” – two of his gold medals were won in Austria. The monument is located in Pello, Mäntyranta’s native town.

You may also like:  Ustiugov Calls For Introduction Of Mixed-Gender Relays In XC Skiing. We Look At Who Would Have Won Were They Held