The skiers drive a lot – and we mean a lot. Between competitions and training venues, an average elite skier clocks tens of thousands of kilometers per season. For many, their cars become like a second home – or, more likely, the first one, as the skiers are more likely to seat in a car, than at the home couches.

The ideal skier’s car needs to be a) spacious – because, you know, all that gear b) snow-already – which in practice means a four-wheel drive c) fuel sipping – because who wants to pay $$$$$ for gasoline?

We looked at some of the ride choices the world leading skiers made.

Here’s Heidi Weng posing by her customized Volvo XC90 D5 R-Design, given to the skier by the Bilia Norway Volvo car dealer ahead of the season’s start.

Lots of carbon in that SUV’s interior – just like in Heidi’s ski, poles and boots!

Heidi since won the FIS World Cup as well as the gold at the team relay in Lahti World Championship. Must be the comfort of those Volvo seat cushions!

Team Northug also likes Volvos. The King of Ski, Petter Northug Jr. himself is still, of course, barred from going behind the wheel following his drunken car crash of 2014 ( Northug was banned from driving for life, which normally means he could appeal to have the decision revoked after some five years)

The dark blue XC60 bearing a recognasible ( and patented) Northug sign was provided by another Norwegian Volvo dealer, Nardo Bil

Nardo Bil has also given a ride, a white V60, to Didrik Tønseth, another Lahti champ in relay.

Conversely, the skiers from the home country of Volvo, Sweden, go with Volkswagen
Here’s the leader of the Swedish team Charlotte Kalla, visibly happy to be using the power of plug-in hybrid VW Passat GTE https://pbs.twimg.com/media/C23BUIOWIAEbF3z.jpg

The Kalla and Volkswagen’s love fest goes back years. This is how Charlotte – and then-newest VW Passat – both looked in 2009. 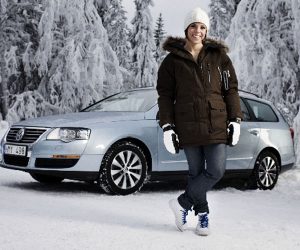 Those were the days, huh?

Lahti’s champion in sprint Federico Pellegrino has one of the fastest times off the start lane. Naturally, he drives Audi R8 courtesy of Audi Italia, probably the fanciest ride of them all on the ski circuit.

Even the “slowest” R8 accelerates 0-to100кm/h in just under 4 seconds, but it has a major fault for a skier – there’s not really enough space for the gear!

Presumably that is why on his training days Federico is using a more utilitarian Audi ( model unknown, but looks like an Audi A4 Allroad , also hardly a modest clunker )

Not everybody is going public with their rides. Both Sergei Ustiyugov of Russia and Alex Harvey of Canada are known to be avid drivers, both have gone on record talking about how driving is actually soothing ( Ustyugov) and how much he misses driving his own car back home ( Harvey) – but neither are sharing their car photos on Internet.